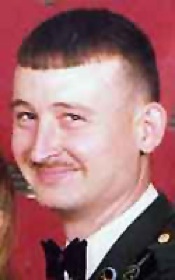 Flora Hicks said her son was an adventurous boy who longed to see the world beyond his native Campbell County. Less than a month after he graduated from Wynn High School in 1986, the 17-year-old enlisted in the Army destined for the life he dreamed of. “He always talked about wanting to go and fly and going places that he’d never been to before,” Flora Hicks said Saturday evening from her home in rural Campbell County. “He said there wasn’t anything out here for him.”

After serving for almost 19 years, traveling the globe and participating in both Iraq wars, Sgt. 1st Class Gregory Hicks made the ultimate sacrifice January 8, 2004, when he was one of nine soldiers killed in the crash of a medical transport helicopter. Hicks was the second East Tennessee soldier killed during Operation Iraqi Freedom and the third to die in overseas combat since Sept. 11, 2001

The 35-year-old native of Duff was heading home to the United States to have surgery after suffering shrapnel wounds to his face and knee damage. Military officials believe the UH-60 Black Hawk chopper was probably shot down by enemy insurgents. Flora Hicks learned of her son’s death when she received a phone call from Gregory Hicks’ wife in Texas. “She was looking forward to having him come home and getting his surgeries taken care of so they could get out and travel with the kids,” Flora Hicks said.

Even before being wounded, Gregory Hicks had decided to retire from the Army in 16 months. He hoped to spend more time with his wife and kids after retiring, his mother said. “(His wife) is just tore to pieces,” Flora Hicks said. “I don’t know what she’ll do.”

Gregory Hicks and his wife Melinda had a 13-year-old son, Chris, and an 18-year-old daughter, Jennifer. “He was an excellent father,” Flora Hicks said. Gregory Hicks was assigned to Company B, First Battalion, 9th Cavalry Regiment of the First Cavalry Division based at Fort Hood, Texas. “He just got along great with everybody and was always a good kid,” Flora Hicks said.

His mother recalled one fond memory of when her son was home a few years ago with his family. It was raining heavily, and Hicks joined his childhood friends and his children for some fun in the yard. “They looked like drowned little rats when they came from out there,” she said with a reminiscent smile.

George Ivey, Hicks’ cousin and boyhood friend, was at the Hicks household Saturday night lending moral support to the devastated family. “He was the most accomplished person in this whole family,” Ivey said. “You couldn’t be more of a somebody.” Now Ivey is left with nothing but memories and thoughts of what could have been. “I sure thought I would get to see him again, but I guess I won’t,” Ivey said. “It’s just something you’ve got to live with.”
By Bryan Mitchell, Knoxville News Sentinel, January 11, 2004

He was laid to rest at Fort Riley Post Cemetery in Geary County, Kansas.