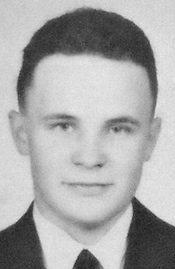 Dan Ward
danward-tn@charter.net
Brother-In-Law
2402 Camelot Circle Johnson City TN 37604-2939 USA
Gordon, You are truly missed and you are not forgotten.
Gordon was my brother-in-law. He was truly a fine officer and a gentleman. He married my sister Nell and they were very happy. He had been in-country almost 9 months when his Huey went down into the ocean. His body was recovered and was returned to Tennessee for burial. I was a pall-bearer at his funeral on my 21st birthday, April 27, 1967. He was buried in the Andrew Johnson National Cementary in Greeneville, Tennessee. Later I served in viet from September, 1969 until September, 1970 as a field artillery officer with C Btry 5th Bn 4th Arty.
Mar 18, 2010

James Campbell
jamfra@cox.net
Acquaintance
6169 Pohick Station Drive
Fairfax Station, va 22039 USA
I Remember Cadet Colonel Walsh
Gordan was our leader in ROTC at ETSU. I completed college there in 1963. I was in ROTC my first two years. I remember so well, and with great respect, this person named Gordon Walsh who was the highest ranking student military officer at our school. He was a highly polished leader with a commanding presence. Had I stayed in ROTC, I would have wanted to be just like Gordon. He was a model for all cadets. He was one of us. He was too good and too young to die. But my memory is still there and always will be our leader, the model soldier for all ROTC cadets at ETSU. Many years ago I found Gordon’s name on the granite wall in DC where I work now and have since leaving Bulls Gap, TN in 1963and had reminisced those days on the drill field when Gordon called out commands and all cadets quickley assembled and followed his lead. He was a leader of the highest order. Certainly his family must be and can be very proud of him and his supreme sacrifice for our country. May God bless. Jim
Sunday, June 20, 2004

Gordon was my uncle that I did not get to meet and I would like to sponsor him. His wife passed away shortly after he did and they had no children.
— Will Walsh

Gordon and I were very close friends in Johnson City, Tennessee. I was a pall bearer in his funeral. Shortly after I went to Vietnam for my first tour in Vietnam. I think of Gordon often and other friends that were lost in Vietnam. Rest In Peace dear friend.
–Bob Taylor, Captain USA