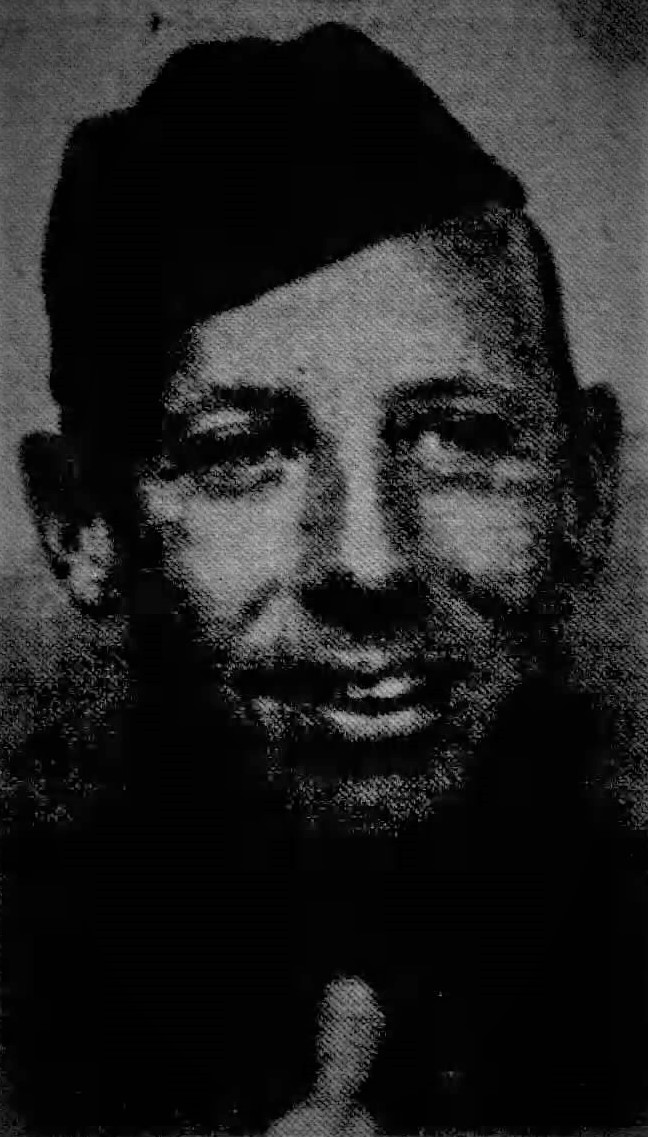 Eyewitness statements from Sgt Bartolomeo Zanotto and S/Sgt Jack J. Williams:
Aircraft B-17G 42-107075 and B-17G 42-31542 were last seen just past the I.P. and during the bomb run or about 7 minutes before bombs away. The two aircraft were flying on our right. It appeared that aircraft B-17G 42-107075 got in the prop wash of an aircraft ahead or the aircraft momentarily was out of control for he slipped to his left and his left wing crashed into the right horizontal stabilizer of aircraft B-17G 42-31542. Each aircraft then pulled to the outside, 075 to the right and 542 to the left. At this point the tail section of aircraft 542 broke off at about the main entrance door and rocketed about 200 feet upward, then it went down in a diving spin and out of sight. The main part of aircraft 542 continued in a diving spin and went out of sight into clouds. Aircraft 075 went down in a slow flat spin and when last seen appeared to be pulling out of dive and leveling off. He then was lost from view in the clouds. No parachutes were seen to come from either of these aircraft.

All crew members of Aircraft 42-31542 were killed in action.

The Chattanooga Daily Times, 19 April 1945
A Chattanooga B-17 gunner, Sgt. Gordon D. Smith, 33, husband of the former Miss Elizabeth Grice, Chattanooga, and son of Mrs. Eleanor Smith, 4112 Sunbury Avenue, was killed in air action in Germany July 19, 1944, the War Department has advised his wife.
Missing in air action in Germany since last July 19, Sgt. Smith graduate of Central High School and former employe of the Gordon Electric Company, was killed ina ction on that date. Following his entry into the army in February, 1942, he served one year in the Aleutian Islands. He received training with an air force unit at Kingman, Ariz., and was assigned to duty as tail gunner with a Flying Fortress group in Europe. He also was stationed fors ome time in Avon Park, Fla. He is survived by his wife, mother and one sister, Mrs. James w. Chambers, Oshkosh, Wis. 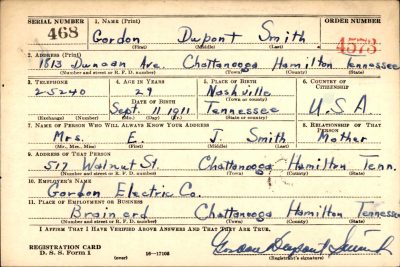 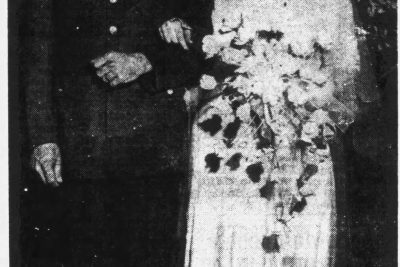 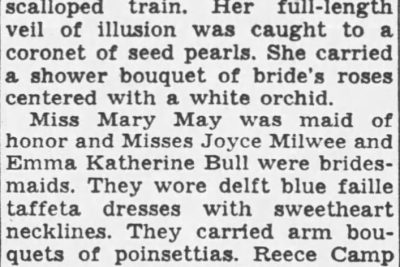 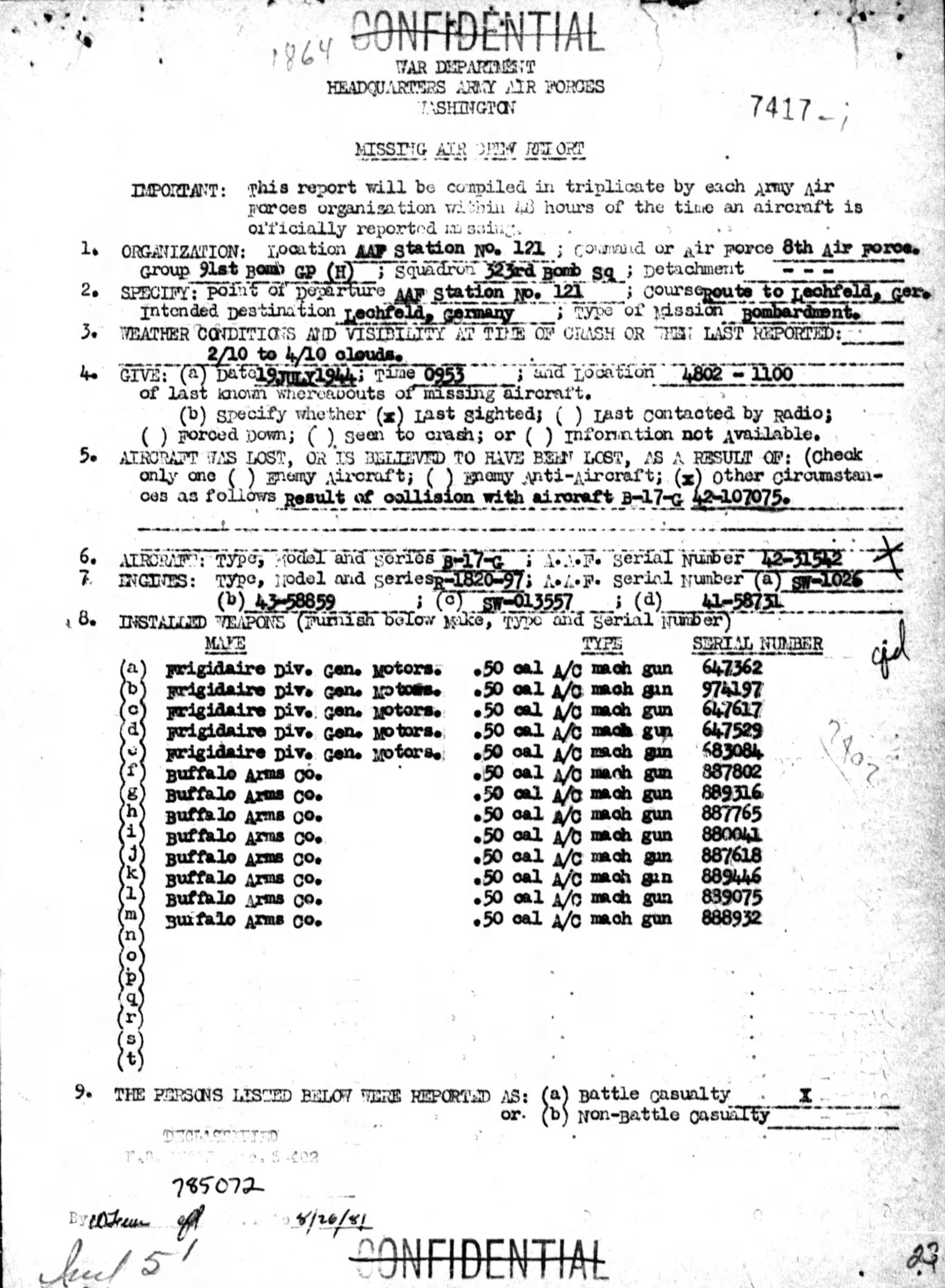 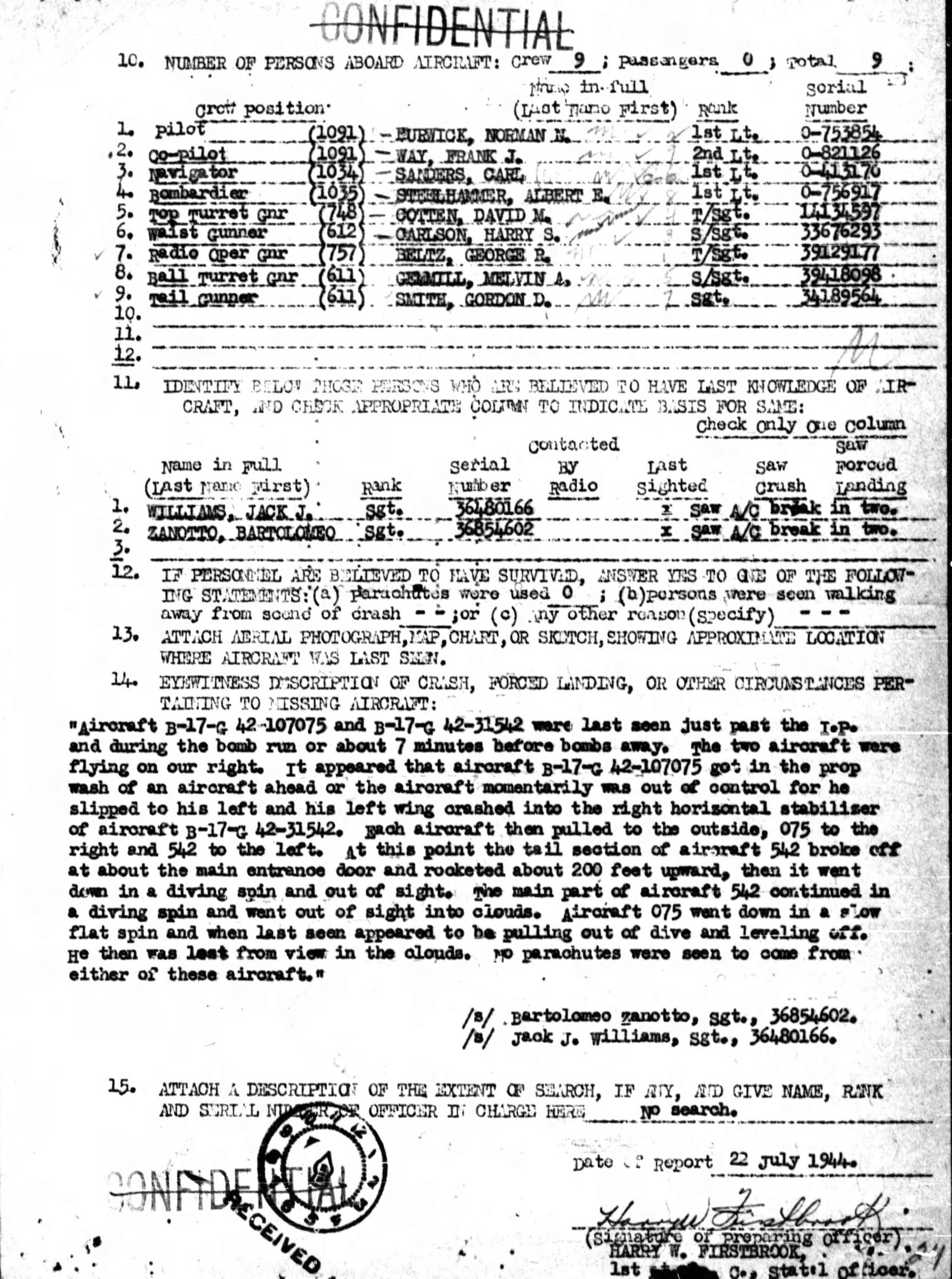 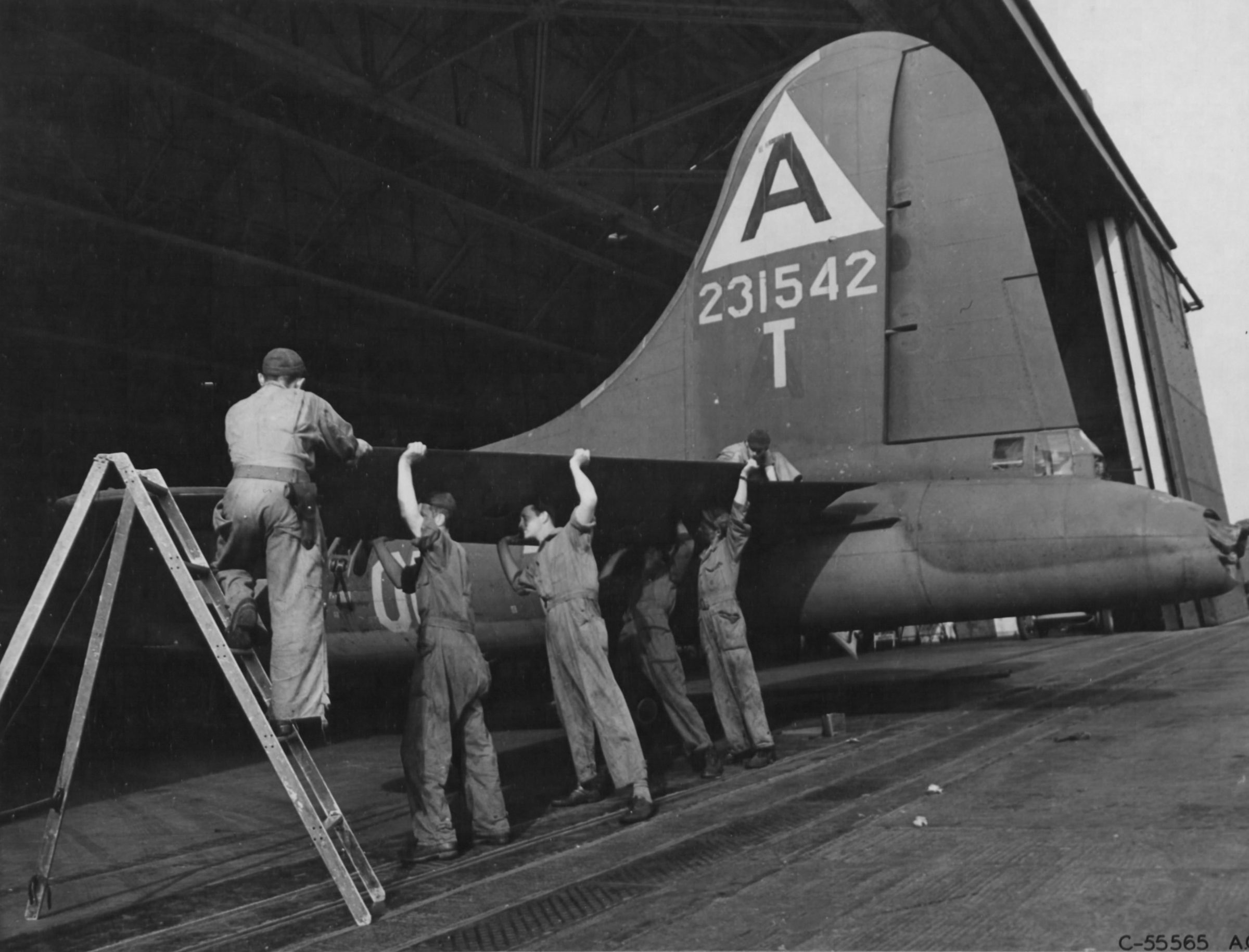 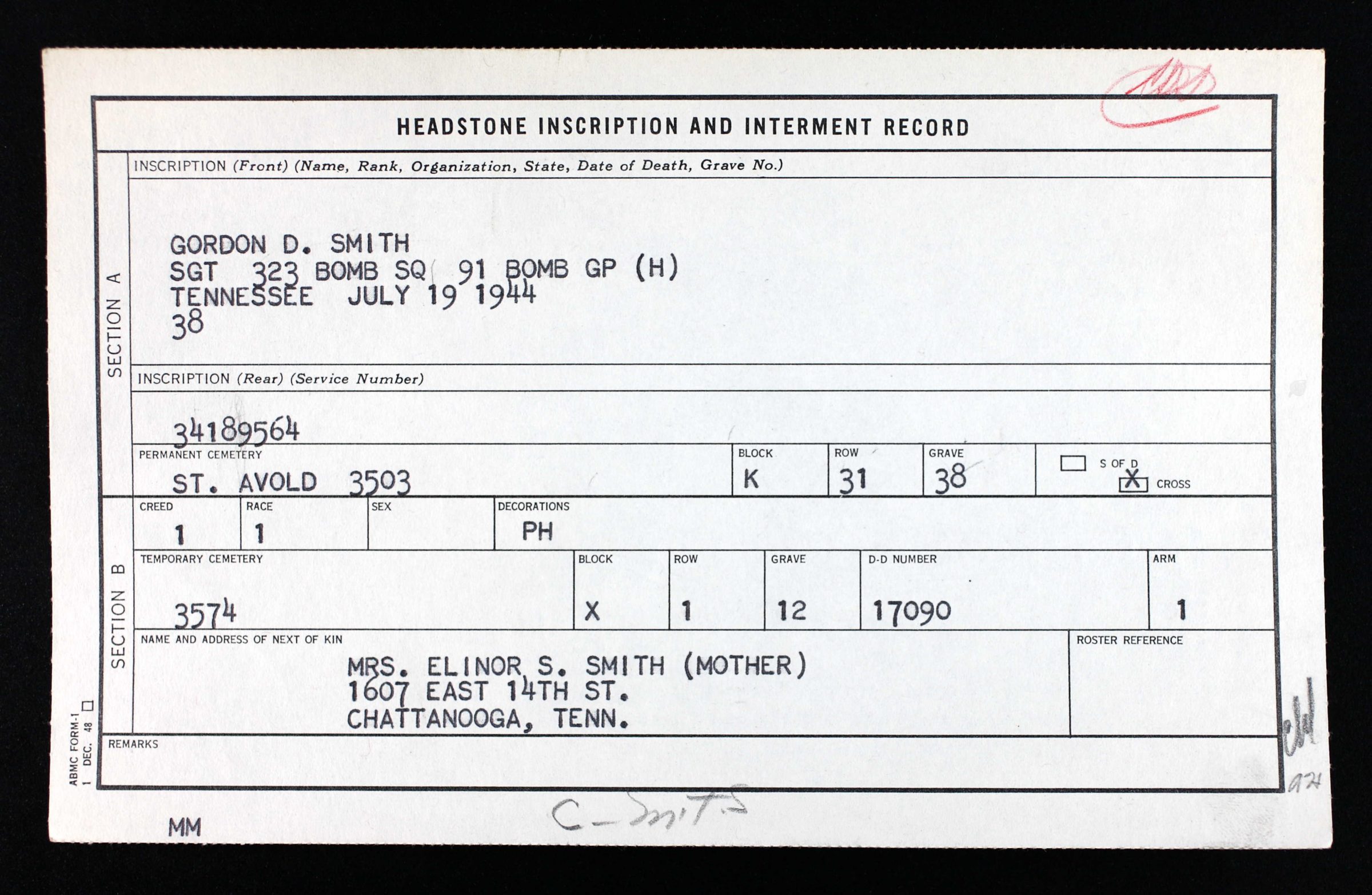