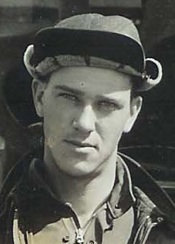 Gola G. Gibby was the son of Dock Haylman and Esther Gibby of Nantahala, Swain County, North Carolina. His mother died before his third birthday and he lived with his father and grandparents in Nantahala, North Carolina. Gola attended grammar school and worked on the farm raising livestock. He joined the US Army Air Corps on November 21, 1941 in Missoula, Montana and listed his hometown as Madisonville, Tennessee.

Staff Sergeant Gibby Gola was a flight engineer on a B-24 Liberator, serial number 41-24229. He was assigned to the 67th Bomb Squadron, 44th Bomb Group stationed in Shipdham, England and on temporary assignments in North Africa. The B-24, in which he was a flight engineer, was named the Buzzin’ Bear. He would serve with the same crew until the crash which killed four of the ten-man crew and left the other six prisoners of war under German occupation. However, two crew members were able to escape and returned to base.

Staff Sgt. Gibby was involved in the assault on Ploesti, Romania and had made bombing raids on several locations in Europe and Italy including the town of Foggia, Italy. On August 16, 1943, on Mission number 45, the bomber squadron had returned to Foggia to strike the enemy airfield when the Buzzin’ Bear was shot down by a German Messerschmitt 109 fighter over Italy. Staff Sgt. Gibby did not clear the B-24 and was killed in action.

The following is an account from the 44th Bomb Group Roll of Honor and Casualties:

“Lt. Leighton C. Smith, flying BUZZIN’ BEAR, a plane which was almost as famous as SUZY Q, was the third 67th Squadron ship lost on 16 August. Like SUZY Q, it was lost without many observing her end. But unlike SUZY, there were some survivors. It was reported that Lt. Smith was having great difficulty maintaining formation due to the heavy flak and the fierce, persistent fighter attacks that were inflicting considerable damage. Shortly after leaving the target, and down to an estimated altitude of 18,000 feet, with the gunners still fighting off the attacks, the plane broke in two.

“Lt. Smith reports he had difficulty in control. This was caused by fighters knocking out our controls on about the second pass. The difficulty was lateral control. Soon, it was obvious to me that bailout was the only solution. At almost that instant, the bailout signal was given.

“The fighters hit our bomb bay tank of 400 gallons of 115 octane. Four chutes were observed, all from the front of the plane, while those in the rear were continuing to shoot down their attackers. of these gunners got out, riding their aircraft to the ground. Two of these gunners were former ground crewmen.

The co-pilot, Milliner, wrote “Up the coast of Italy, the formation was a bit loose and relaxed. This changed on the approach to the target as everyone tightened up and prepared to drop their bombs. At that moment, flak started coming up, very heavy and seemed to be concentrated on the lower aircraft. The 67th was flying high cover so it seemed we did not get much flak, however, the flight behind us could have picked up some. This flight consisted of Hager, Batemen, and Curelli. At this moment, my mind maybe wandered and I started thinking about what the mess hall might serve for dinner when we got back. Everything seemed to be okay until the fighters appeared, just after we left the target, and I snapped back to reality. Our guns opened up and small holes started to appear in our wings, and engine nacelles on #2 and #3 were taking hits. The fighters were very accurate and determined. The only enemy aircraft I saw were 109s, and they were attacking Austin and Whitlock from the rear.

“At this time, I was trying to spot fighters attacking us. No frontal attacks were observed. All came in at 6 o’clock and 4 o’clock. I could not see these, but knew they were there. Small caliber was glancing off my windows at about 45-degree angles going up. These had to come from the attack at 4 o’clock under the Bear. After the first couple of attacks, the intercom must have gone out because nothing was coming in. So I took mine off and hung them on the side. I looked back to the flight deck and McCabe was sitting on the deck with a frightened look on his face. I did not have time to question him, but I thought that he was supposed to be at one of the waist guns.

“At this time, I looked toward Hill and saw him push the nose into a steep dive. Evidently, Smith did not see this and wanted to know where he went. I was sure Hill was not hit very badly and was taking evasive action. At this time I leaned over and told Smith to give the Bear everything it had and emphasized ‘Get the Hell outta here!’ Smith throttled forward and I looked to my right and another burst hit from 4 o’clock. I heard a loud pop in the bomb bay and turned to look. McCabe was gone from the deck and at that moment a fire broke at the base of the fuel tank bomb bay and started to spread very quickly. At this very moment, an enemy fighter must have unloaded his guns from about 100 feet at 6 o’clock. We even seemed to be keeping up with the wall of lead that hit us.

“The Bear shuddered. I’ll swear I could hear it groan. The nose shot up and I looked at Smith. He was trying to make sure his chute harness was okay. At this moment, I grabbed the controls and pushed the nose back down and pushed the alarm bell because I wasn’t sure that Smith had hit it. I shouted for Smith to go out the top hatch because I thought the bomb bay doors were closed. The fire was so intense at that time you could not see into the bomb bay. Smith dived for the door and I saw him disappear into the fire. I was sure, no way, he could make it out of that inferno alive. Miraculously, he did, but suffered second degree burns on his face, hands and neck. His clothes were scorched a bit and surely he was in great pain. Finally, getting my own wits together, and realizing there was no saving the Bear, I reached for the latch on the top hatch. It dropped and immediately the suction from the opening caused the fire to fill the flight deck and up through the hatch. This I did not count on. By now, it was too late to do any counting. I dove for the opening and hung there for a couple of moments and then swung my feet out on top of the fuselage and toward the rear of the plane. My right leg was hanging over the leading edge of the wing, however, there was no problem getting up and running off the end of the wing just past #1. My clothes were on fire when I left the hatch, but the rush of air put the flames out almost immediately, leaving me with burns on my face, neck, armpits, and legs. My clothes, especially my shirt, would crumble and fall apart. Big blisters had popped on my neck and left it very raw.

“On the ground I met an Italian count that could speak very good English. He had visited the crash site and confirmed the number of men that had perished with the aircraft. He had also watched the air battle from the ground and said that the “Bear” had spun in from a great height.

Many of the crewmen lost with Buzzin’ Bear were from Bill Cameron’s original crew. Cameron recalls: “In late March, 1943, there was a desperate search for people to form new crews in the 67th Squadron. In a few days, I soloed in the “Little Beaver.” Shortly thereafter, two officers recently transferred from the RAF were assigned to me as my co-pilot, Bill Dabney, and Navigator, Tom Clifford. Five volunteers from the ground crews who had worked on “The Line” were sent off to gunnery school. Upon their return, I had my two flight engineers in Winters and Gola Gibby, two waist gunners, Ernest McCabe and Jerry Grett, and a tail gunner, Frank Maruszewski. A real character, a reject from a B-17 outfit, was given to us as our radio operator, Gerald Sparks. The last to join our crew was our bombardier, “Gentleman” Jim DeVinney. Thus was our crew born, ‘a fine, eager bunch of kids it was!'”

Gola Gibby was repatriated back to the United States after the war and was laid to rest at Memphis National Cemetery, Memphis, TN on December 1, 1949. S.Sgt. Gibby was buried in a common grave with fellow gunners, Ernest G. McCabe and Gerald L. Grett.

In his childhood home of Whittier, NC, Gola Gibby was honored by having the local Veterans of Foreign Wars Post 8013 named in his honor. 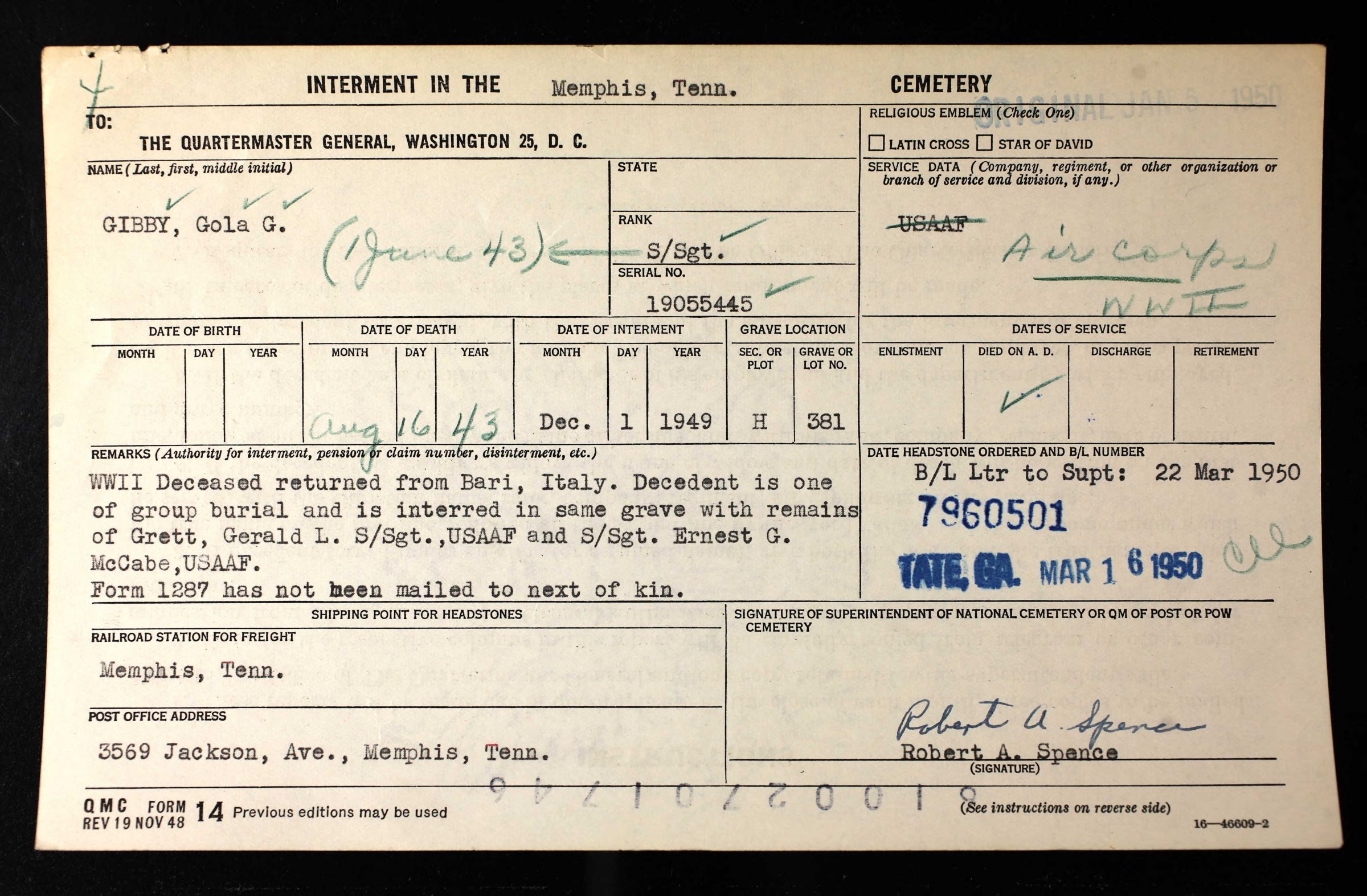