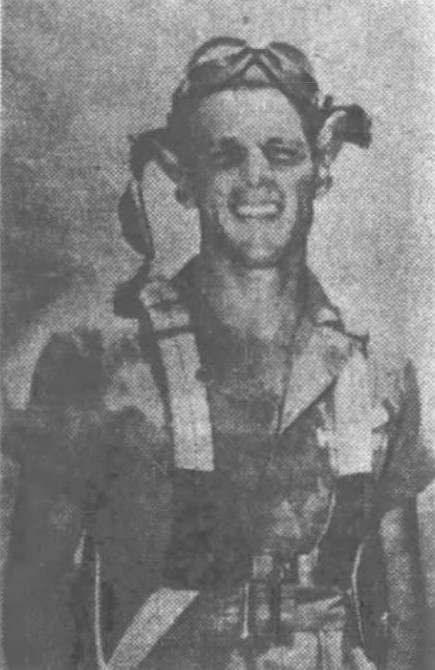 Glenn W. Connelly was born in Chattanooga to Samuel Roth Connelly and Irene Louise Whiteside.
He died non Battle as an Aviation Cadet on 14 August 1942, Georgia; he was 23 years old

Chattanooga Daily Times, 15 Aug. 1942
Aviation Cadet Glenn Whiteside Connelly, 22, son of Mr. and Mrs. Sam R. Connelly, prominent Chattanoogans, was killed yesterday in an airplane crash at the army air forces basic flying school at Bainbridge, Ga. News of the tragedy was reported in a wire from the school to the popular young Chattanoogan’s parents and in an Associated Press dispatch from Bainbridge. The dispatch said Lieut. Merrill C. Hinkson and Aviation Cadet Connelly were killed when their plane crashed near the field during a routine training flight. Lieut. Hinkson was a flying instructor. Col. R.E.L. Choate, Commanding officer, said the cause of the crash was not determined and no other details were given. Nor were there any details in Co. Choate’s wire to the Connelly’s addressed to their West Brow home on Lookout mountain. The wire said: “Regret to inform you of the untimely death of your son, Glenn Whiteside Connelly, who was killed in an airplane accident at this station 1:30 p.m. today.***”
Cadet Connelly volunteered last fall and had been in the air corps since that time. He was first at Keesler Field, Biloxi, Miss. Then he became an air cadet and was sent to Lakeland, Fla., for a period of primary flight training. Completing the work at the Lakeland school Aug. 1, he was transferred to the Bainbridge (Ga.) school for his basic training. After attending the University of Virginia for three years he entered the service instead of returning to the university, where he would have been a senior. At the University of Virginia, he was one of the most popular students and was a member of the A.T.O. fraternity. Keenly interested in boxing, he was a member of the university’s boxing team, featherweight class. A native of Chattanooga, he received his preliminary education at Baylor school here, entering the university of Virginia after his graduation from Baylor. A brother, Sam R. Connelly Jr., is an air cadet at Douglas, Ga. Young Connelly’s father is prominent in the business and civic life of Chattanooga. He is vice-president and manager of the Coca-Cola Bottling Co., Inc.
He is survived by his parents; brother, Sam Jr.; sister, Irene Connelly; grandmothers, Mrs. Glenn Whiteside, all of this city, and an aunt, Mrs. F.B. Showalter, of Georgetown, Ky. 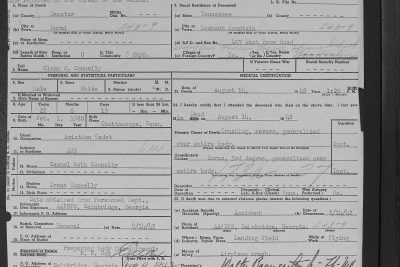 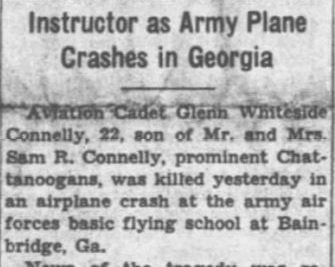 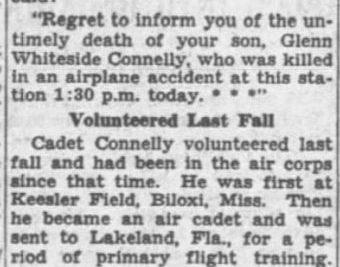 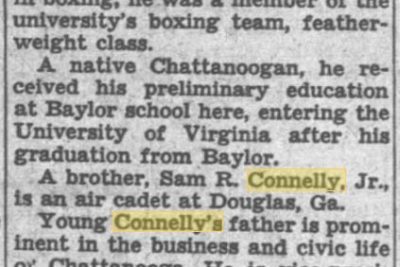