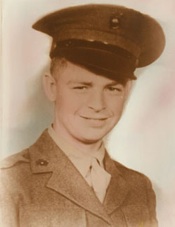 My brother Glenn Alvin Watson enlisted in the Marines in 1943. I had two brothers in the Armed Forces in World War II. Glenn was the youngest, only 18. After completing basic training he was sent to Saipan. Glenn was leader of the 709th platoon U.S. Marine Corps. Following the battle of Saipan he was sent to Tinian Island. When the Marines stormed the beach, Glenn was killed by mortar fire July 30, 1944. He was buried on Tinian Island. His body wasn’t returned home until much later. The Chaplin of the 709th Platoon came to our home and to the burial service when the body was finally returned home. He told us how Glenn helped him with chapel services for the Marines. He also told us how brave Glenn was in battle. Being the youngest of 8 children and only 12 at the time, I don’t remember a lot about the war. What I do remember and will never forget is what a wonderful big brother Glenn was to me. He was so loving and caring of me, his baby sister. Glenn received several medals: Purple Heart, Pacific Campaign and World War II Victory Medal. Glenn proudly served his country and gave his all for the freedom we know today. I am so proud of him. We think of him with tears, pride and honor.
–Submitted by his baby sister, Mildred Watson Cole 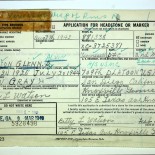