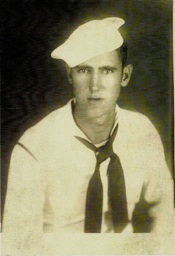 Glen Loyal Bridges died May 28, 1945, on the U.S.S. Drexler off the coast of Okinawa, Japan. Ship was hit by suicide planes. He was also on a ship in the Atlantic, and it was sunk by a German submarine. The German sub surfaced and began to shell the crew. Glen’s ship launched a plane that dropped a bomb and blew up the enemy sub. The plane was lost. He came home on leave and told his mother that he didn’t think he would be coming back. Glen was shipped out to the South Pacific on the U.S.S. Drexler, and it was sunk by a Japanese suicide plane. Half of the crew was lost.
Submitted by David E. Shaw

Father Harvey Bridges, Sr. had passed away with cancer in 1937 leaving his wife Bessie with ten children to raise. The four eldest boys went into service during World War ll. The other three went in when they became of age. Glen’s mother, Bessie, was given his Purple Heart posthumously. 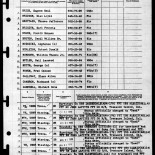