Statement from 2nd Lt Mark Medick
I was flying as pilot of aircraft #42-97202 which was in No. 3 position of the Lead Element of the High Squadron on a mission to Ludwigshaven, Germany on May 27, 1944. I first saw Lt Howard R. Evans apparently after he had been attacked by enemy fighters because the propeller of his no. 3 engine was feathered. I noticed a white vapor coming from his gas tanks and presumed that they had been hit in this attack in addition to the no. 3 engine. Then I saw him attacked by enemy fighters and a black vapor appeared which indicated an oil leak. After this attack he pulled out of formation and headed toward Switzerland under control. The Alps were plainly visible from where we were. I saw no parachutes nor did I hear anything from Lt Evans on VHF.

The aircraft crashed at Durlach near Karlsruhe.

The Knoxville News-Sentinel, May 10, 1944
Sgt. Glen E. Joiner, 22, of 1147 Atlantic Avenue, has managed to survive two hair-raising experiences in which he lost his FLying Fortresses and almost lost his life, a story from the Eight Bomber Base in England reveals today. The last escape came recently on the return from a Munich raid. The Fortress in which the Knoxvillian was waist gunner reached the Channel with two engines swinging like pendulums and its body a mess of flak holes and tatters, and plunged to a watery grave. It’s name, by the way, was “Ten Graves to Berlin.” On the other occasion, Sgt. Joiner and crew fellows raced for the protection of a nearby hill after their bomb-laden B-17 crashed in an English field. “They reached the field only seconds before the bobs exploded and blasted the ship and leveled everything else within hundreds of yards,” the dispatch said. Of the other occasion, the Atlantic Avenue man is quoted as saying, “To give you  an idea of how much flak went through us – when I picked up my parachuste it fell apart in my hands.”
“This (Munich) trip was uneventful until we reached the Channel on the return,” First Lt. Howard R. Evans, Douglas, Ariz., the pilot explained. “There, three flak burst riddled the ship. The first – nearly sliced in half te ball turret guns and sieved the radio room fuselage and tail.” he second filled the No. 1 engine with more than 100 holes. “The third hit the No. 2 engine and also took part of the wing.”
The story continues that: Ïn mid-Channel the Fort struck and the crew scrambled through the roof. Only one life raft came out and until they were rescued the men used it in turn – fine inthe raft and five hanging from its side. They were discovered by a Spitfire pilot who directed a seaplane and a speed launch to the scene.” So Sgt. Joiner is unscathed and still going strong.

The Knoxville Journal, May ,23, 1944
An Oak Leaf Cluster to the Air Medal has been awarded Staff Sgt. Glen E. Joiner, 1147 Atlantic Avenue, waist gunner on a B-17 Flying Fortress somewhere in England, it was announced yesterday. The award was for “meritorious achievement”on bomber attacks on enemy Europe. Sergeant Joiner, 22, has taken part in 11 combat missions. An alumnus of Stair Technical High School here, the flier was an assistant manager at a night club in Knoxville before entering service in the summer of 1942. 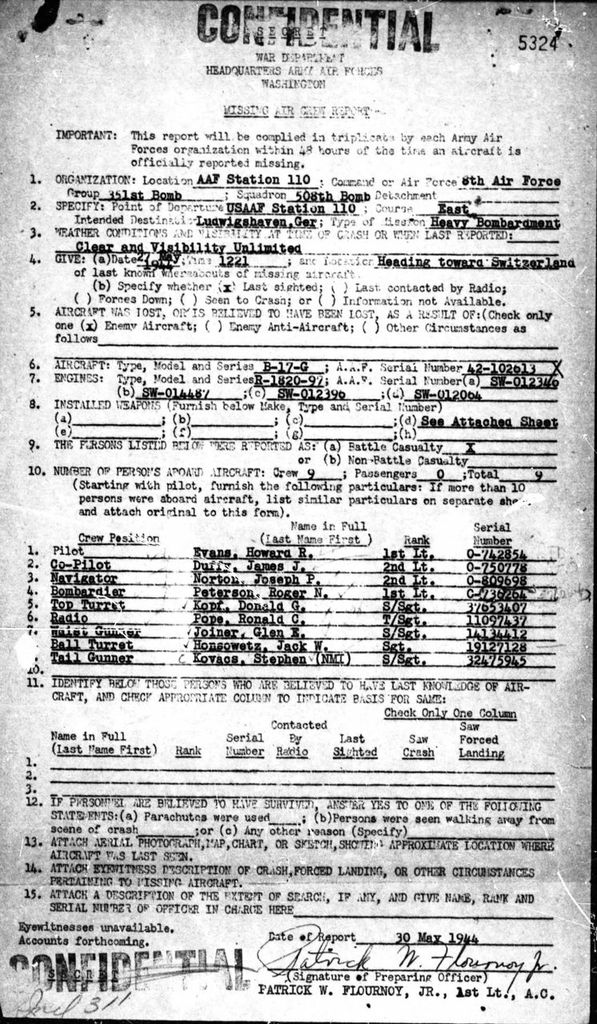 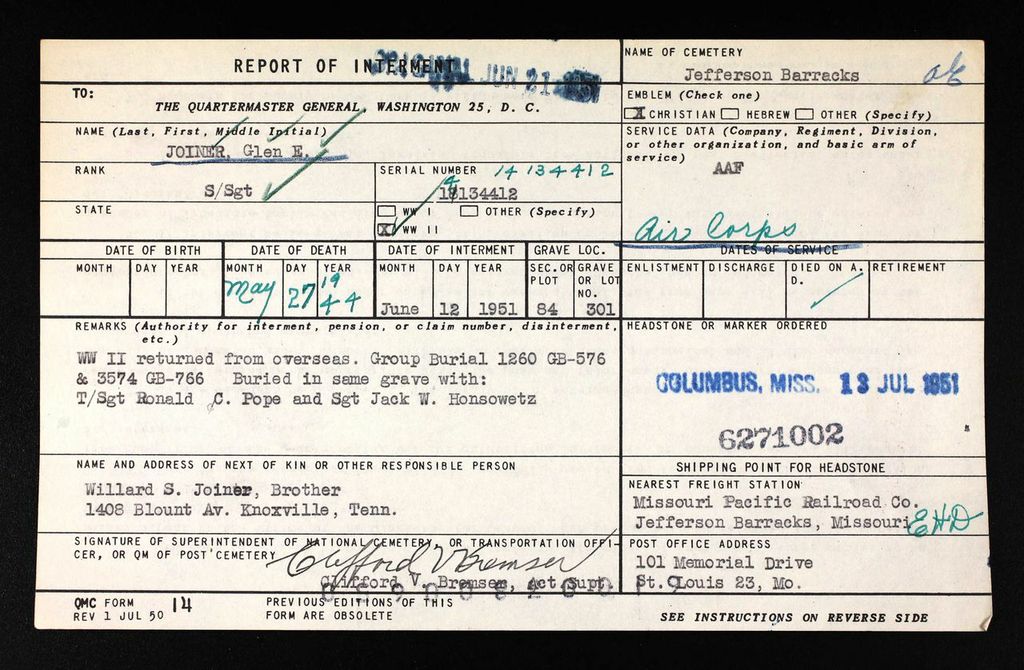 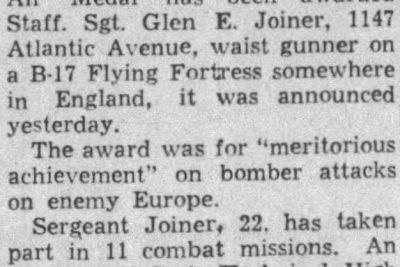 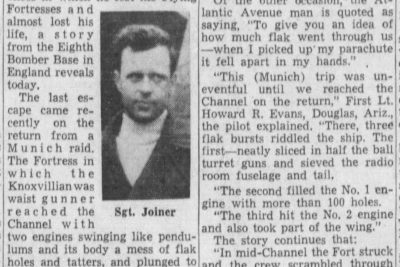