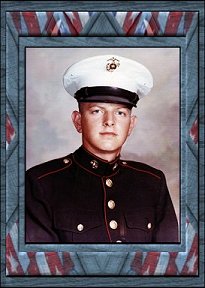 Gerald Eugene King
Length of Service: 2 years
His tour began on May 10, 1968
Died at the age of 20 in Quang Tin, South Vietnam
Cause of Death: Hostile, Ground Casualty, Other Explosive Device

In the spring of 1968 the North Vietnamese Army’s 2nd Division was enroute to South Vietnam, moving down the Ho Chi Minh trail in Laos. By early May, the division’s advance regiments – the 1st and 2nd Regiments – had entered South Vietnam using the French-built Route 14 which passed by the old French fort at Ngok Tavak. The NVA commanders decided that Ngok Tavak and the main Special Forces camp at Kham Duc had to go.

Beginning at about 0300 on 10 May 1968, Ngok Tavak came under heavy attack by a North Vietnamese Army infantry battalion, an element of the 2nd NVA Regiment. In a pitched battle, the small force of defenders staved off immediate defeat, but by noon on 10 May it was clear that Ngok Tavak would have to be abandoned. Surrounded on three sides by the 2nd NVA Regiment, it was clear the withdrawal would have to be by foot moving to the north – the attacking force had made a helicopter evacuation impossible. After destroying equipment and supplies which could not be carried out, the survivors began the move to the main camp at Kham Duc, proceeding along a lane flanked by near-continuous air strikes. They were picked up by helicopter midway to Kham Duc, arriving at the camp at about 2100 (9 PM) on 10 May. The defending force at Ngok Tavak had incurred numerous losses in both known dead and missing soldiers and Marines:

The bodies of the two men marked with asterisks above were brought out during the retreat from Ngok Tavak; the other 14 Americans could not be recovered.

-On August 10, 2005, the Department of Defense POW/Missing Personnel Office announced the identification of the remains of 12 U.S. Servicemen missing in action from the Vietnam War. Five of those identified, including Cpl. Gerald E. King, were returned to their families for burial, and the remaining seven were buried as a group in Arlington National Cemetery.

-Cpl. King was buried in Arlington National Cemetery on September 17, 2005.

“We called him Jerry. He was the oldest of four sons of Ebb King Jr. and Joetta May King. His brothers were Dennis, Kenneth and Terry. Jerry’s parents are deceased now. His younger brother Dennis lives in San Diego while Kenneth and Terry still live in Knoxville where they all grew up. He was very loving and devoted to his family and would always put the needs of his family before his own. He joined the Marines because he thought they were the best. That’s the way he did everything. The best he could. He was very proud to be a Marine and often wrote about the Marines he served with. He said they were like his brothers away from home. I know the feeling of brotherhood he was talking about. I was a Marine myself.

We found out on June 23, 2005, that after a little over 37 years his remains had been recovered and identification had been made. We are planning a burial service some time in September. I know my family will be able to give some kind of closure to this. My thanks go out to all the people involved in this recovery and my heart is with others who share in the same grief.

I can’t begin to say what a true honor it is for us to be his brothers. Not just now. This is something we always knew and felt. He was our world.” -Dennis King

-Kham Duc Special Forces camp (A-105), was located on the western fringes of Quang Tin (“Great Faith”) Province, South Vietnam. In the spring
of 1968, it was the only remaining border camp in Military Region I. Backup responsibility for the camp fell on the 23rd Infantry Division (Americal),
based at Chu Lai on the far side of the province.

The camp had originally been built for President Diem, who enjoyed hunting in the area. The 1st Special Forces detachment (A-727B) arrived in September 1963 and found the outpost to be an ideal border surveillance site with an existing airfield. The camp was located on a narrow grassy plain surrounded by rugged, virtually uninhabited jungle. The only village in the area, located across the airstrip, was occupied by post dependents, camp followers and merchants. The camp and airstrip were bordered by the Ngok Peng Bum ridge to the west and Ngok Pe Xar mountain, looming over Kham Duc to the east. Steep banked streams full of rapids and waterfalls cut through the tropical wilderness. The Dak Mi River flowed past the camp over a mile distant, under the shadow of the Ngok Pe Xar.

Five miles downriver was the small forward operating base of Ngok Tavak, defended by the 113-man 11th Mobile Strike Force Company with its 8 Special Forces and 3 Australian advisors. Since Ngok Tavak was outside friendly artillery range, 33 Marine artillerymen of Battery D, 2nd Battalion, 13th Marines, with two 105mm howitzers were located at the outpost.

Capt. Christopher J. Silva, commander of Detachment A-105 helicoptered into Ngok Tavak on May 9, 1968 in response to growing signs of NVA presence in
the area. Foul weather prevented his scheduled evening departure. A Kham Duc CIDG platoon fleeing a local ambush also arrived and was posted to the outer perimeter. It was later learned that the CIDG force contained VC infiltrators.

Ngok Tavak was attacked by an NVA infantry battalion at 0315 hours on May 10. The base was pounded by mortars and direct rocket fire. As the frontal
assault began, the Kham Duc CIDG soldiers moved toward the Marines in the fort yelling, “Don’t shoot, don’t shoot! Friendly, friendly!” Suddenly they
lobbed grenades into the Marine howitzer positions and ran into the fort, where they shot several Marines with carbines and sliced claymore mine and
communication wires.

The defenders suffered heavy casualties but stopped the main assault and killed the infiltrators. The NVA dug in along the hill slopes and grenaded
the trenches where the mobile strike force soldiers were pinned by machine gun and rocket fire. An NVA flamethrower set the ammunition ablaze,
banishing the murky flare- lighted darkness for the rest of the night. SFC Harold M. Swicegood and the USMC platoon leader, Lt. Adams, were badly
wounded and moved to the command bunker. Medical Spec4 Blomgren reported that the CIDG mortar crews had abandoned their weapons. Silva tried to operate the main 4.2 inch mortar but was wounded. At about 0500 hours, Sgt. Glenn Miller, an A-105 communications specialist, was shot through the head as he ran over to join the Marine howitzer crews.

The NVA advanced across the eastern side of Ngok Tavak and brought forward more automatic weapons and rocket-propelled grenade launchers. In
desperation, the defenders called on USAF AC-47 “Spooky” gunships to strafe the perimeter and the howitzers, despite the possible presence of friendly
wounded in the gun pits. The NVA countered with tear gas, but the wind kept drifting the gas over their own lines. After three attempts, they stopped. A
grenade fight between the two forces lasted until dawn.

At daybreak Australian Warrant Officers Cameron and Lucas, joined by
Blomgren, led a CIDG counterattack. The North Vietnamese pulled back under
covering fire, and the howitzers were ret