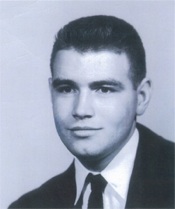 George was a draftsman in the HQ 593rd General Support Group. He did blueprints, briefing maps etc. Just before the Tet Offensive it came the office’s turn to send a TDY to man a blocking position in a mountain pass near Qui Nhon. It had been over a year since I had been up and I was packing to go when George stepped into the room and said he wanted to go to check on how they had followed his blueprints for the new bunkers. As an E-5 he got command of one of the positions. The first day of TET 3 days later at 2 or 3 AM the position was hit by sappers. A grenade killed him as he was waking up; his tent mate got the VC who tossed it and one with an RPG as they ran past. – Robert Perkins

SOLDIERS UNBREAKABLE BOND
Bristol Herald Courier
“Retired Army Sgt. Luther Manus visted Bristol in search of the family of George McReynolds, a man who served under Manus in Vietnam and who was killed in action in 1968” By Rober Brown Published August 3, 2009

BRISTOL, Tenn. Retired U.S. Army Sgt. Luther R. Manus Jr. has traveled a rich and rewarding path since the early morning hours of Jan. 30, 1968, in Qui Nhon, South Vietnam. He has earned a master’s degree in counseling. He has enjoyed a successful career as a school counselor in his native Erie, Pa. He has seen his children become successful in fields ranging from business to education to medicine. He has been happily married to Connie, a beautiful and engaging woman. Yet Manus, now 81, lived the past 40 years longing to complete a personal mission, one elusive and never far from his thoughts. That mission was to meet the family of Army Specialist 5 George W. McReynolds of Bristol, Tenn., a young soldier who was under Manus’ command during the Vietnam War. McReynolds was a brave guy from Tennessee High who didn’t flinch when assigned to guard a nearby hilltop that January 1968 morning in Qui Nhon. But he died doing so. “Yes, it has almost become an obsession to me,” Manus said of his desire to meet those George McReynolds left behind.

Sitting with Connie in the lobby of the Courtyard Marriott Inn in Bristol, Va., recently Manus leans closer and lightly touches a reporter’s arm. “It’s something I must do to re-connect, to have closure I guess,” the old solider says. “I just want his family to know, from me, what a good man and soldier he was.” Thanks to luck, fate, goodwill and plenty of good people, retired Army Sgt. Luther R. Manus Jr. can now say, “Mission complete. Mission accomplished.” The memory Ask Manus what he remembers most about McReynolds, and a broad smile follows. “I called him ‘Rebel’ because he was this hard-fightin’ Southern kid. But he had a few choice names for me, too,” Manus said, laughing. “Can you imagine that? It’s the 1960s. There’s racial problems all over back home in the States. But here’s this young white Southern guy and his black sergeant in Vietnam, and we’re friends who can say all sorts of stuff to each other. And laugh about it. And work together,” Manus said. “It was something else.” But there’s been something else that, for 40 years, he’s remembered even more about McReynolds. “He was an A-1 soldier,” Manus said. “A good soldier. When he was called on, he didn’t complain, he didn’t shirk, he didn’t argue. He just did it, man. He just did his duty.”

On a Jan. 29, 1968, evening, Manus said, McReynolds didn’t argue when assigned by a second superior in their general-support unit to stand guard for 12 hours on the hill, overlooking some U.S. Navy boats below. “I was the last to see George head up the hill at 7 p.m.,” Manus said. “I assumed I’d see him coming back down it the next morning at 7.” But about 1 a.m., the hilltop was attacked by enemy Vietcong soldiers. During the fierce firefight that followed, a crude explosive device erupted near McReynolds, killing him. He was 25 years old. “He fought hard and he fought and died heroically,” said Manus, who was responsible for identifying McReynolds’ body. “I’ve never forgotten that, but I’ve always wondered if his family ever knew that. It’s always haunted me, thinking they might not.” In the years since, Manus has visited the Vietnam  Veterans Memorial Wall three times to see McReynolds’ name displayed on Panel 35E, Row 77. In 2003, he donated $100 in McReynolds’ memory to the Disabled American Veterans National Service Foundation. But in his heart, Manus said, he knew he hadn’t done all he could to honor McReynolds. It was that lingering, stubborn doubt that lead him and Connie to start searching online for anyone under the name “McReynolds” in the Bristol, Tenn., phone listings. They found one couple, Dan and Ann McReynolds, but they had absolutely no relation to George McReynolds. But then, there was a lucky breakthrough. The connection In the hotel lobby, Ann McReynolds looks across the lunch table she and Dan are sharing with Manuses and laughs as she gestures toward her husband. “It’s a good thing Dan didn’t answer when Luther and Connie called,” Ann McReynolds says. “He would have said, ‘Sorry, wish I could help,’ and then hung up. That would have been it.” With a sheepish smile, Dan McReynolds says, “That’s probably true. I’m just not as inquisitive as she is.” But it was Ann who answered the phone that day, when the Manuses called from Pennsylvania. And it was she who listened to Manus explain his unfinished, gnawing journey to honor a brave, fallen comrade from Bristol, Tenn.

A former special-education teacher in Knox County, Ann was touched by Manus’ story “and by the aching desire for closure she heard in his voice.” “After we got done talking, helping Luther find someone in [George McReynolds’] family almost became my mission as much as his,” Ann McReynolds said, laughing. The two couples eventually agreed to meet in Bristol, Va., and spent two days trying to help Luther Manus bridge the gap in his life that began 41 years ago on a hill in Southeast Asia. That’s when yet another twist of incredible luck arrived, as the couples happen to talk with a Web-savvy wiz at the Marriott who provides some tips on finding George McReynolds’ obituary online. “Who would have ever thought that would happen,” Luther Manus said. Suddenly, the odds of completing his mission appeared much brighter. “Being in the right place at the right time? Meeting this person, that person, who’s willing to care enough to help someone they don’t really know? It’s really been something,” he said. After a series of keyboard clicks and some phone calls, the “re-connection” Manus sought for decades was suddenly, amazingly, possible.

Two of George McReynolds’ surviving sisters, Evelyn Ledwell and Sandra Kieffer, said they were willing to meet him in Bristol, Tenn., that evening. The closure, the moment-the re-connection-is emotional, deep and soul-stirring. Luther Manus, accompanied by his wife, Connie, and Ann and Dan McReynolds, tells George’s sisters about their brother’s bravery, his humility and his steady sense of duty. He tells them about his long-held quest to honor George McReynolds’ memory as fully as it deserves with spoken words and eye contact with his loved ones. Something more than a mere sheet of paper that notes George McReynolds was awarded the National Defense Service Medal, Vietnam Service Medal, Republic of Vietnam Campaign Ribbon, Army Commendation Medal and Purple Heart for what he sacrificed on that hill in Qui Nhon. Finally, Luther Manus tells the sisters of his desire to be taken to McReynolds’ grave at Weaver Union Church Cemetery in Bristol, Tenn. The request is granted. “It meant a lot to my wife, him coming here,” said Richard Ledwell, Evelyn’s husband. “It was an overwhelming thing, She’s always wanted to talk with someone who could tell her more about what George did. And then someone shows up who cares enough to do just that.” The experience, the closure, the end of the mission, is just as overwhelming to Luther Manus Jr. “I do feel like things are complete now,” he said. “It’s more than you can put into words. It’s been a long time, you know? But I finally feel like I’ve truly honored George McReynolds.” Mission completed. Mission finally-finally-accomplished. rbrown@bristolnews.com | 276 645-2512, Aug 12, 2009

George and I started work in Washington DC, at the Army Map Service, the same day, in 1962. Just two good old country boys looking for a better life than farming in Southwestern VA. I didn’t know George very well, but remember him fondly as a kind and gentle person. When we went to Washington I was already in the Army Reserve and George was drafted into the regular Army. His lottery number came up and he left for active duty. I didn’t have any further contact with him. I remember the day I received word that George was a casualty of the Vietnam conflict. Sad day!!! R.I.P George.
–Submitted by Tommy Vannoy

Went through basic training with George at Fort Campbell Ky. Great man who you could trust to the very end. Our mothers talked often as we were in service. I will forever miss him!!!
–Submitted by Bob Martin