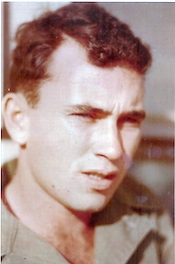 Staff Sergeant George Washington Higgins was a crew member of a B-29A Superfortress Bomber with the 93rd Bomber Squadron, 19th Bomber Wing based at Kadena Air Base, Okinawa. On April 12, 1951, while on a bombing mission, his aircraft was attacked by an enemy MiGs and it was ditched. His remains were recovered.
Location of Loss At Sea: West Coast North Korea

Before being Killed in Action, George was awarded the Air Medal and 2 Oak Leaf Clusters on his Purple Heart.