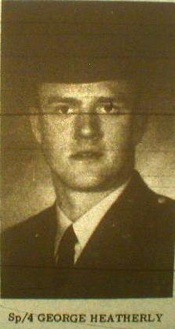 Specialist 4 George Glen Heatherly was born on April 13, 1947, and was originally from La Follette, Tennessee. He was a graduate of La Follette High School in 1965 and attended the United States Military Academy at West Point, NY. He served his country in the Vietnam War in the United States Army, as a combat engineer in B Company, 4th Engineer Battalion, 4th Infantry Division. After one year of service in the Army, his tour in Vietnam began on March 8, 1969. On May 14, 1969, SP4 Heatherly was killed under hostile conditions in Pleiku province, South Vietnam; he was 22 years old at the time of his death. SP4 Heatherly is buried at Sunrise Cemetery in La Follette, Tennessee, and is memorialized on the Vietnam Veterans Memorial on Panel 24W, Line 6.

The following is the obituary for SP4 Heatherly:

He was a standout football player for the LaFollette High team and attended the U.S. Military Academy before transferring to Tennessee Tech University. He enlisted in the Army last year.

Besides his wife, he leaves his stepfather and mother, Mr. and Mrs. James Hembree; sister, Francis Hembree; step-brother, James Hembree, Jr., all of Chester, Pa.; and grandfather, Jess Heatherly of LaFollette.

The body will be retured to Roach Mortuary Chapel for funeral services and burial.

The following are further online tributes left on the Virtual Wall for SP4 Heatherly:

Daniel Johnson
A FRIEND TO ALL
I meet George when I frist went to Germany we were in the same squad togeather he was the 1st friend that I made in the service I was the smallest in the company, and he was the biggest.George had a large impact on my life. To this day I still think of him. I am sure that some of the things that he taught me in Germany were what got me home from Vietnam. George I just want to thank you for everthing and being my friend. Dan

We were a small high school class in comparison to many, the LaFollette High School class of 1965, so we knew each other pretty well! Fortunately for me, because of our last names, I got to sit with George in many classes in our high school years together — and I can well remember our talks and laughs. He was the embodiment of strength, depth, gentleness and kindness. I don’t think I have ever known a more gentle soul, nor anyone more loyal to friends, community and, ultimately, our country.

George, you have been greatly missed these many years. As we prepare to gather for our 40th year reunion, we salute you with loving and caring memories.
From a friend, Jeannie Heatherly 28 May 2005

08 Jan 2008
George was one of the nicest young men you would ever meet, he could light up a room with his smile, and his politeness. He died in Viet Nam, but he is remembered at every high school reunion. His kindness to others will always be remembered. God bless the sacrifice he gave for freedom.
From a high school friend, John Mynatt 8 Jan 2008