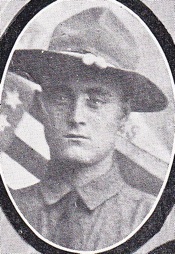 As a member of the Third Tennessee Infantry George Elliott Waitman saw service on the Mexican Border in 1916. Was again called to the colors in 1917 and as a member of Company C, 117th Infantry, 30th Division was stationed at Camp Sevier, SC. Embarked for France on May 11, 1918. Sergeant Waitman, while advancing with his platoon in the attack of October 8 on the Hindenburg support line, was killed by enemy shell fire.

He was born in Knoxville, Tennessee. He died at the age of 21. Sgt Waitman was initially buried at the American Cemetery, Bony, Aisne, France. Buried at Knoxville National Cemetery, B-16, 3666.