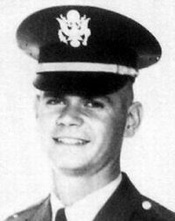 Captain Taylor had been in the United States Army for three years. His tour in Vietnam began July 7, 1967. Captain Taylor was serving as the Commander of Battery A, 4th Battalion, 42nd Artillery, 4th Infantry Division when he was killed in action near Quang Duc, South Vietnam. Captain Taylor was repatriated back to the United States and he was buried in Chattanooga National Cemetery on September 11, 1968. He was awarded the Purple Heart, National Defense Medal, Vietnam Service Medal, and the Vietnam Campaign Medal.His name is memorialized on the Vietnam Wall at Panel 45W Line 064

Vietnam Veteran Memorial Fund Remembrances:
George Taylor and I had an incredible recurring acquaintance. We were officer candidates together at Ft. Sill in 1966. That is where I met him. After graduation we went to different assignments. He stayed at Sill and I went to Ft. Bragg. After 9 months, unknown to each other, we both got orders to Nam with a TDY in-route to TAB school at Sill. So we hooked up again there. On completing TAB school it was some leave time, and then on to report in Vietnam . At the REPO-DEPO in Long Bin in July 1967 there he was again. We were fellow officers in the same replacement group. On our training patrol he gave his typical concerned leadership to a lot of very nervous non-combat-arms-men who were in the weeds for the first time. After in-country familiarization we were off to our respective Artillery units.

One night on patrol as FO with 28th , dismounted from our tracks, I had my first contact mission. I was pretty scared and I called for fire support from the several available units. One voice among the supporting units sounded familiar. After some coded jargon we established who each other was. George Taylor was reassuring on the other end. He carefully helped me select some good rounds. When things calmed down, we set up some random defensive fires and he kept his promise of we will take care of you through the night. The periodic thuds proved he was up and on the job.

Some time later after I had gone to the battery A4bn42FA4th ID as FDO, George was assigned as our XO. We had some good times, became good friends in the months which followed until I left country in July 1968. I watched him be an effective and dedicated leader in the battery. Meanwhile he formed a good written acquaintance with a girl in my wife’s office back in the world. They met and became friends when he was home for his 30 days.

We were all struck when Don Smith wrote from hospital in October to let me know of action that night and that George was killed. We had all been concerned that he had extended for an extra 6. His Dad later told me that he had said I need to be back with my men. That dedication would be typical of George. I have a shell fired at his burial and given to me by his Dad. I hope his folks are OK, but maybe they are with him by now.

Who knows, George, maybe we will loop back around one more time and share another shot of Jonnie Black at 600am. I can’t do it, but I think of you. God Bless to a Good Friend and an outstanding example of America’s Best who were lost.
-John Parsons A Battery442nd Arty 767-768

I knew Captain George Taylor for only a short time but was impressed by his commitment. George did not have to be in-country. He had completed a tour and extended for 6 more months. George did not have to be on the fire base. He volunteered to replace the battery commander who was on R&R. Alpha Battery moved to a supporting position near the SF camp at Duc Lap during an NVA siege. To relieve the pressure supplied by the artillery, an NVA sapper unit penetrated the position during the night and laid waste to the unit. While George was attempting to call for defensive fires from a sister battery, a B40 rocket hit the FDC, claiming Captain Taylor and two other artillerymen. The supporting 503d Infantry suffered several more casualties. Never a more gallant redled served in the 4th Bn, 42nd FA, 105 Towed, IVY Division during my tour. Captain George Taylor did not have to be there – but for his commitment to Duty, Honor, Country. -Bruce Bennett, 868-869, 442FA4ID.