Pvt Adams enlisted on 23 December 1940 at Fort McPherson Target Range in Georgia. He was assigned to the Quartermaster Corps.

The Chattanooga Daily Times, February 23, 1945:
Pvt. George Adams, 22, husband of Mrs. Virginia Bowman Adams, who is now residing with her parents, Mr. and Mrs. I.J. Bowman, 2624 Carr Street. Pvt. Adams was reported killed in action on Jan. 13 in Luxembourg while fighting with Gen. Patton’s Third Army. His home had been in Knoxville before he entered the army. He met and married Miss Virginia Bowman here in 1943. He had been overseas since March, 1944. 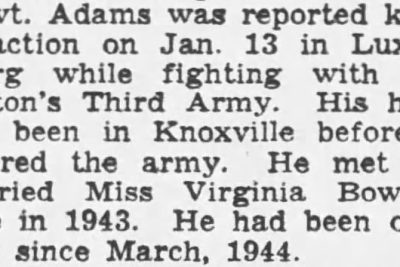 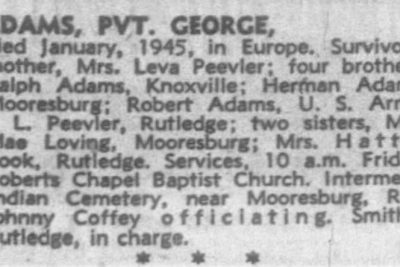