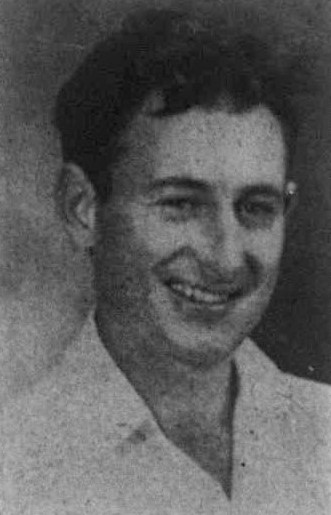 Daily Post Athenian, May 10, 1945
Sgt. George Amos Riden, 24 year old son of Mr. and Mrs. Sam Riden of Route 2, Athens, died in battle on Luzon, March 31 according to an official telegram received recently by his parents. Sgt. Riden had been overseas two years of his two years and eight months service, serving in Australia, New Guinea and the Philippines.

Daily Post-Athenian, August 13, 1948
The remains of the late Sgt. Geo. Amos Riden, age 24, who arrived in Athens this week from the Atlanta Memorial Depot was removed to the home of his parents, Mr. and Mrs. Sam Riden on the Piney Grove Road near Athens where it will remain until the funeral hour.
Sgt. Riden entered service July 25, 1942 and reeived his basic training at Camp Butner, N.C He was sent overseas in February 1943 and landed in Australia and saw service in New Guinea and the Philippine Islands. He was killed in action March 31, 1945 on Luzon. He was attached to Co. D, 128th Inf. Regt., 32nd Div.
Sgt Riden was educated in the schools of McMinn County and before entering service was employed at the Athens Stove Works. Survivors beside his parents, are five sisters, Mrs. James Walker of Athen, Mrs. Arvil Wall of Sweetwater, Misses Maggie, Virginia nd Sarah Jo Riden all of near Athens; six brothers, Warren, Ivan, Carey, Wayne, Harold and Max all of near Athens. Grandmothers, Mrs. Mollie Riden and Mrs. John Cooper both of near Athens. 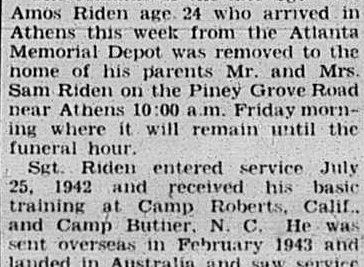