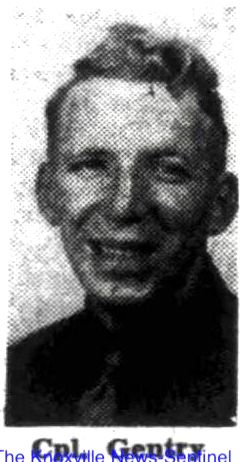 CORPORAL, WAS ASSIGNED TO THE 39TH SQUADRON, 6TH BOMB GROUP ON TINIAN ISLAND. ON 12 FEBRUARY 1945, HE WAS AN OBSERVER ON A RADAR SEARCH MISSION FOR JAPANESE SHIPPING BETWEEN TINIAN AND THE JAPANESE EMPIRE. FORTY FIVE MINUTES AFTER TAKEOFF THEY CRASHED INTO THE PACIFIC OCEAN, THERE WERE NO SURVIVORS. HE WAS AWARDED THE PURPLE HEART.

Charles Newton Gentry was born as a twin to his sister Mary Ellen; they became motherless the next day and were reared by maternal grandparents James and Ellen Davis. His father in 1928 married widow Mayme Nicholson Cross. At age seven the twins’ father passed in 1932 with their grandfather James Davis having passed in 1930. Now living with their grandmother, she in ill health felt it necessary to send the twins at age 16 years to live with their Aunt and Uncle W J Norton in Umatilla, Florida. The grandmother passed in 1942. After high school Charles enlisted into the US Army on 26 Jun 1943 at Camp Blanding, Florida. Serving as a radar operator on a B-29 his plane exploded bursting into flames while at sea. His body was not recovered after the explosion over the Pacific.
His name is engraved at The Court of the Missing at the Honolulu National Memorial Cemetery of the Pacific. 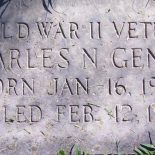 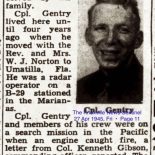