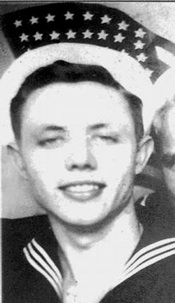 General Preston Douglas was born July 26, 1922 in Newcomb in Campbell County, Tennessee. His parents were Walter and Bertha Douglas; his brother was Walter Garfield Douglas, and his sister was Regina Douglas Collins. He enlisted in Navy on December 17, 1941 and served on the U.S.S. Helena (CL-50).  He was missing since 6 July 1943 and officially declared dead on 10 August 1945. Memorialized at Manila American Cemetery.

The U.S.S. Helena was hit by a torpedo on the night of 5-6 July, 1943 by Japanese surface forces off Kula Gulf, New Georgia Group, B.S.I.

A dog tag for “Seaman 1st Class, General Preston Douglas” and remains were discovered at Ranonga Island eroding out of the ground near a trail by his village. It is a mystery as to how he got there, died and who buried him. In June 2006, a resident of Ranonga Island notified the US Consulate, who notified John Innes who researched the name and contacted JPAC. In mid-September 2006, a team from JPAC traveled to the island and visited the burial site. His remains were positively identified by the lab. He was laid to rest at Gollihon Cemetery next to his sister on January 26, 2008.

WW II Sailor Finally Laid to Rest.
By: Mike Williams, 4th February 2008, Citizen Tribune.
Tennessee man’s remains found in 2006, returned for burial 64 years after death.
Sneedville Tennessee – In a crowded chapel in a small town nestled in the shadow of the snow capped Newman’s Ridge, a standing room-only crowd gathered to remember a man no one in the room ever met. There were soldiers from four wars, school children and distant relatives who came to remember Seaman 1st Class General Preston Douglas.

Douglas was a sailor in WW II. He was assigned to the USS Helena, which came under attack at the battle of Kula Gulf. On the morning of July 6, 1943, a Japanese submarine torpedoed the Helena. Nearly 1,000 men were on board. All but 174 were safely evacuated before the ship slipped into its watery grave.

Douglas was among those who died. For the next two years he was listed as Missing in Action. Finally, in 1945, he was officially declared Killed in Action. Though the new designation brought closure to his grieving, questions persisted. For years, his sister, Regina, made many inquires about her brother’s fate, which remained a mystery until 2006.

On a warm sunny day on a secluded beach on the Solomon Island of Kolombangar, a beachcomber discovered a dog tag protruding from the sand. After a little digging, he found several bones. He contacted the United States Department of Defense, which excavated the area. There they uncovered bones, teeth, the dog tags and a metal four leaf clover that Douglas carried.

The remains were 50 miles from where the battle had taken place. How they got there remains a mystery. The DOD issued a statement saying the prevailing theory is that his body may have washed up to shore, where it was buried by natives. Later, soil erosion may have uncovered it.

After careful investigation, the DOD located the Douglas family. The family had moved from Newcomb, Tenn., where he was born to Sneedville. “My mother spent many years wondering what happened to her brother,” said Denny Douglas, nephew of General Douglas. “We were all very happy when the Department of Defense confirmed that it was my uncle’s remains they found. It was in early 2007 that they confirmed it was my uncle’s remains.”

Unfortunately, Regina Douglas had developed Alzheimer’s disease by 2006. She was unable to comprehend that her brother’s remains had been found. Regina Douglas died in November 2007. She didn’t live to see her brother’s remains returned home.
The funeral for General Douglas was held Jan. 26 at McNeil Funeral Home in Sneedville, six and a half decades after his death. His Flag draped coffin sat next to a table with a portrait of him, along with a display case containing three medals awarded posthumously. The patriot guard, an organization formed to honor fallen soldiers, bore two American flags in the chapel.

After “Amazing Grace” was sung, Hancock County Mayor Greg Marion delivered a short speech. “I don’t how he lived,” he said. “I don’t know if he worked on his parent’s’ farm before he left to answer his country’s call for men; I don’t know if he had a girlfriend that he sent letters to. There is so much we do not know about him. But today he is home. He will be buried next to the loving sister who wondered about him so often.”

The coffin was then escorted across Clinch Mountain down a winding road to an old community cemetery. As many as 200 people braved the chilling cold, and the color guards proudly displayed flags from all branches of the service as well as the United States flag, the flag of Tennessee and the MIA flag. After a brief prayer, there was the firing of the 21 gun salute, the highest honor bestowed at a military funeral. Dozens of active and retired soldiers, ranging in age from 20 to 80 and in their military dress uniforms, stood at attention as the somber notes of taps resonated throughout the valley.

The mystery of his fate is now resolved. The final fleeting moments of his all-too-brief life will remain, as inscribed on the Tomb of the Unknowns in Arlington Va., “known but to God.” 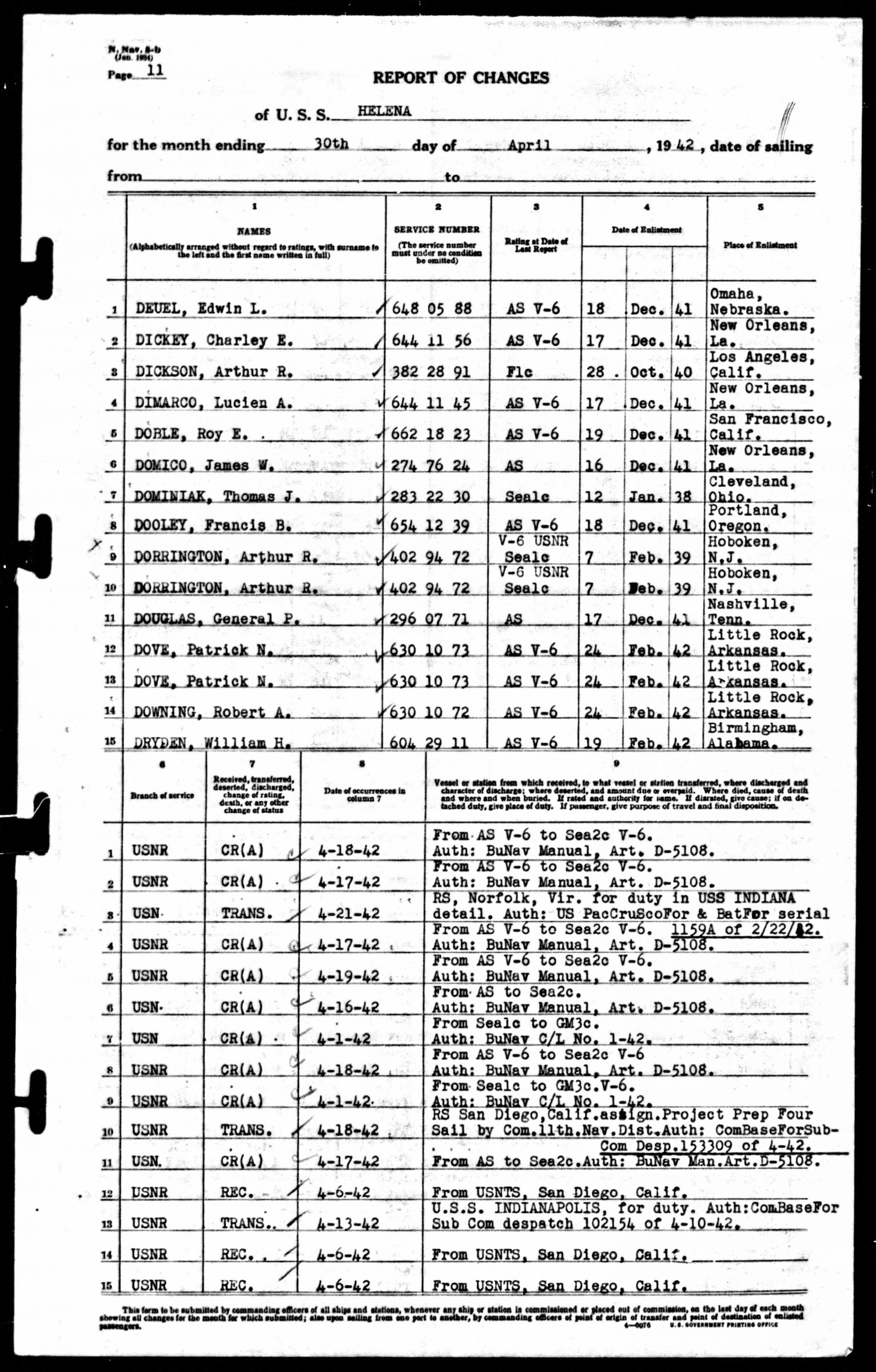 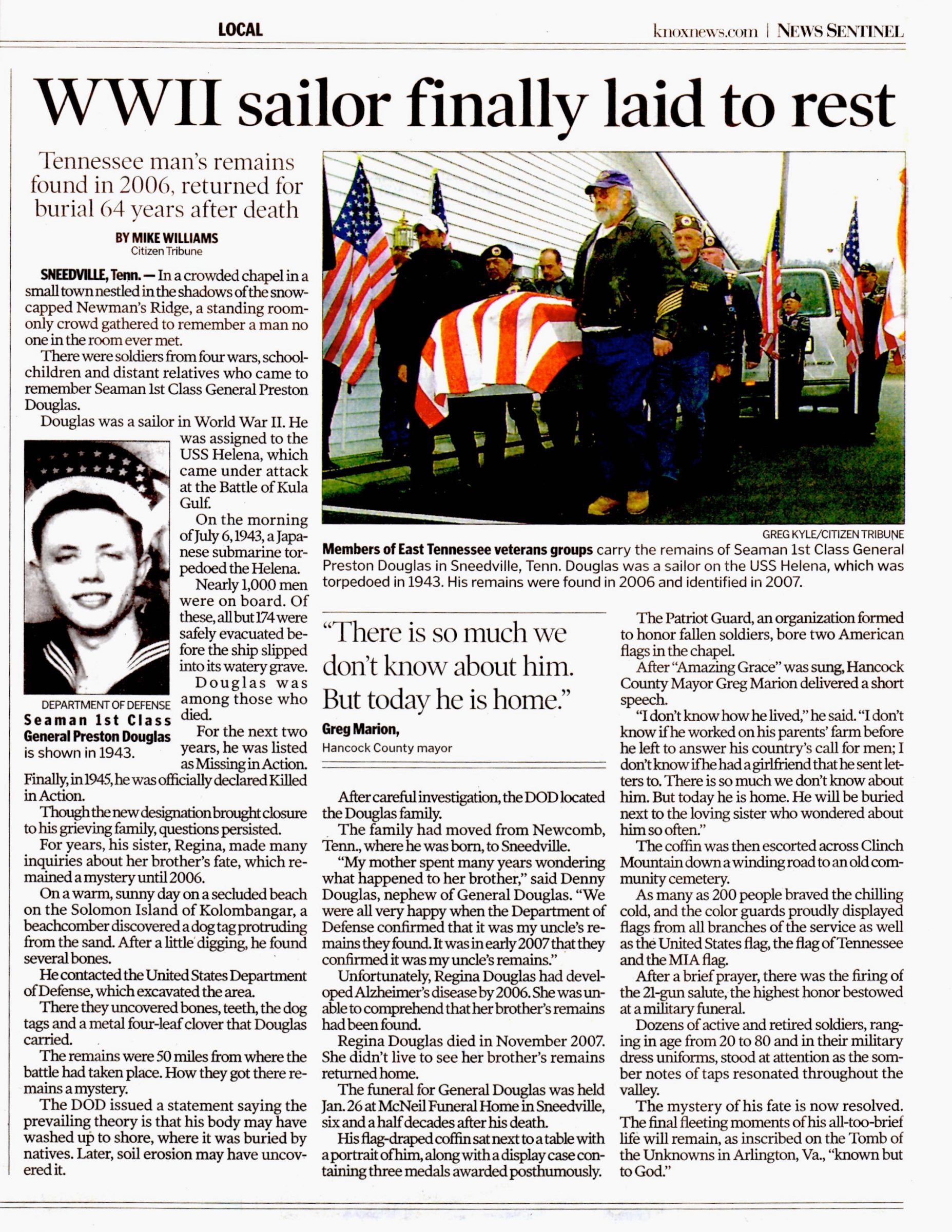 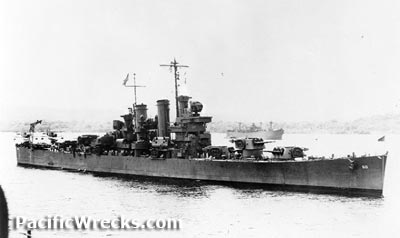 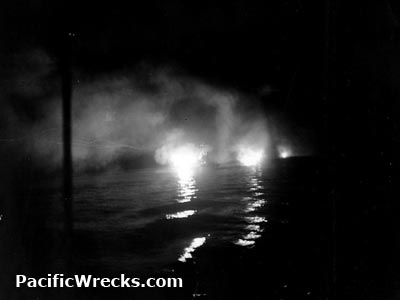