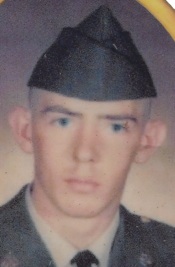 Gary was born in Johnson City, Washington County, Tennessee on 15 February 1948 and grew up in the Lamar Community of Jonesborough, Tennessee. He graduated Lamar High School, Class of 1966. He was a member of the Beta Club. Soon after graduation, Gary moved with his father to Dearborn, Michigan and enlisted in the United States Army on 7 February 1968 in Detroit, Michigan.

After basic and advanced training, Gary was assigned to Company A, 1st Battalion, 506th Infantry Regiment, 101st Airborne Division as a Light Weapons Infantryman. His tour of duty began in Vietnam on 17 January 1969 and he was killed in action while engaged with the enemy in Thua Thien Province, South Vietnam on 26 July 1969. Gary had been wounded in action previous to this engagement and awarded his first Purple Heart. For his actions, he received the Bronze Star, Purple Heart with Oak Leaf, National Defense, Vietnam Service and Vietnam Campaign Medals. Gary rests in Roselawn Memory Gardens, Johnson City, Carter County, Tennessee, Section Gethsemane, Lot 13D, Space 3 and is commemorated on the Vietnam Memorial Wall; Panel 20W Line 052.

Gary was 21 years old and a member of the Green Pine Mission Baptist Church. He was the son of James H. Tinker and Louise Garland. Gary was married and had one son.
-Submitted by Allen D. Jackson, USAF (Ret)