Freeman A. Greene Jr. was born on September 27, 1924, in Oklahoma. He was the son of Freeman A. and Ruth Gruim Greene. After a year of college, he enlisted in the Army Air Corps on April 6, 1943, in Keesler Field, Biloxi, Mississsippi. He died on October 17, 1943, in Montgomery, Alabama, as the result of an accident. He is buried in Grandview Cemetery in Maryville, Tennessee.

The Maryville Times, Monday, October 18, 1943
F.A. Greene Jr., 19 year old son of Mr. and Mrs. F.A. Greene of Maryville, was killed last night near Maxwell Field, Alabama, when the taxi in which he was riding collided with a train. No further details of the accident could be learned this morning except that both occupants of the taxi were killed instantly. Greene was an air cadet stationed at Maxwell Field. He was graduated from Maryville high school and attended Maryville College last year. He had been in service about three months. 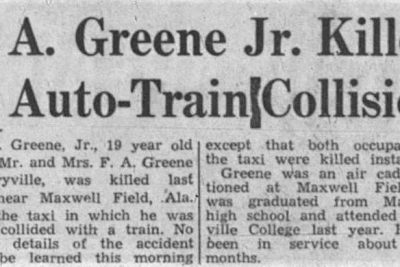