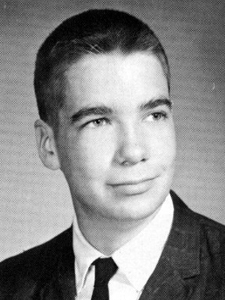 From Westport, Connecticut
Married
19th Tactical Airlift Squadron, 315th Tactical Airlift Wing, 7th Air Force
Died at the age of 24 in Khanh Hoa, South Vietnam
On board of Bookie 102 #55-4574 when it crashed a 1:30 PM in the hills of Cam Ranh Bay
Cause of Death: Non-Hostile, Died Missing, Air Loss, Crash on Land

“He was known to us as Rick and as I recall a big UT fan; being a big UK fan we often had the usual dialogue that continues to today. The pilot on the flight was Marvin Arthington from Burkburnett, TX. there were no survivors in that crash. I do remember that we were having a squadron cookout and we waited and waited for them to return. No news of the crash had been received until later in the evening. As you can imagine, it was a great shock as both of the fine aviators were well thought of by all. I think that there were some 56 or so passengers on that flight; Reports that I read indicated that there was little or nothing left of the aircraft due to fire.”
Submitted by David H. Rhodes, Col (Ret) USAF