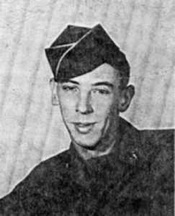 Frederick Bonham Bean was the son of Floyd Raymond Bean and Margaret Emmaline Knott.
Service Occupation: Infantry Reconnaissance Scout
Sergeant Bean was a member of Headquarters Company, 31st Infantry Regiment, 7th Infantry Division. He was taken prisoner of war while fighting the enemy near Uisa-ni, North Korea on November 29, 1950, and died while a prisoner on February 12, 1951. His remains were not recovered. His name is inscribed on the Courts of the Missing at the Honolulu Memorial.

Sgt. Bean entered the Army in December 1948 and received his basic training at Fort Jackson, South Carolina. He was transferred to Japan in August 1949 and to Korea in September 1950. He was in Korea two months when he was captured at the Chosin Reservoir. A letter to the Bean family in July 1953 from the Defense Department explained that he had died from malnutrition.

Before Fred entered the Army, he attended Rule High School and was an employee of the Knoxville Journal. He was the son of Mr. and Mrs. Floyd Bean of 2626 Waverly Place, Knoxville.

Sgt. Bean was probably captured in a tragedy/disaster for the 7th Inf. Division, the destruction of “Task Force Faith”.  See: http://en.wikipedia.org/wiki/Task_Force_Faith

The Knoxville News-Sentinel, December 5, 1950
Two Knoxville soldiers have been awarded the Combat Infantryman’s Badge for “satisfactory performance of duty under enemy ground fire in the Suwon, Korea, are.”
The soldiers, Cpl. Frederick B. (Buddy) Bean and Cpl. Steward A. Fitzpatrick, are both with the 31st Infantry Regiment, 7th Infantry Division. After two amphibious invasions, the unit played a leading role in the capture of Seoul and later crossed the Ungi  River to battle through snow-capped Mountains to the Manchurian border. Cpl. Bean, a graduate of Rule High School, and former Partime News-Sentinel employe, is the 20-year-old son of Mr. and Mrs. Raymond Bean, of 1710 Beaumont Avenue. 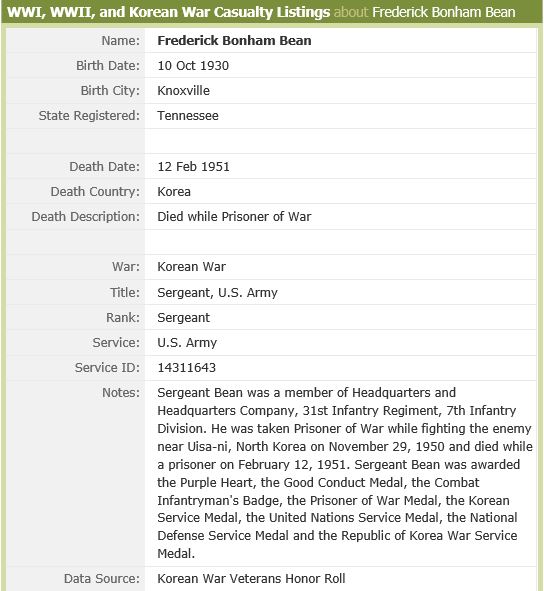 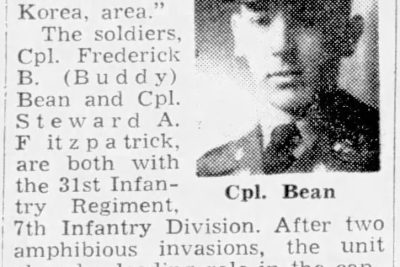