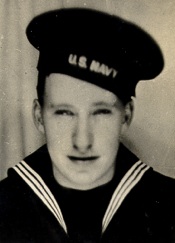 Shipped aboard The Liberty Ship, SS John Winthrop, as a member of the Naval Armed Guard. The John Winthrop vanished in transit across the North Atlantic during the war. Post war records from Germany showed that she was torpedoed and sunk on 24 September 1942. Lost in the action Crew 39, Armed Guard 13. Officially declared dead October 5, 1943.