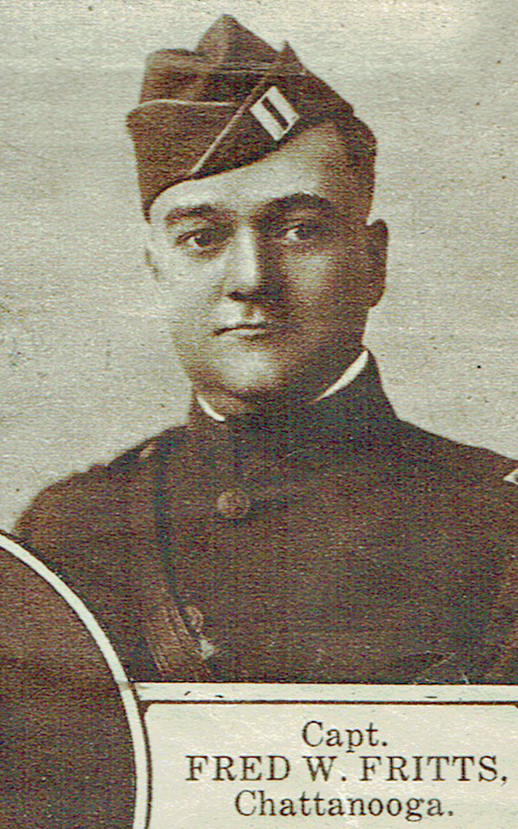 Frederick “Fred” Wiehl Fritts was born in Chattanooga, Tennessee to Benjamin Franklin Fritts and Inez Amanda King. He married Daisy Elizabeth  Mynders in September 1911 in Knoxville, Tennesee, who died in 1912.

The Chattanooga News, October 28, 1918
Gallant Young Officer gives life
Fred W. Fritts dies soon after reaching France.
News of Sad Tragedy Comes in letter from Naval Nurse at Base Hospital>
A letter received Monday morning by Mr. And Mrs. B.F. Fritts, 109 Vine street, from Lillian L. Halliday, a nurse in the United States navy, contained the startling announcement of the death of their son, Capt. Fred Wiehl Fritts, at a naval base hospital of pneumonia. According to the message which contained the sad intelligence, Capt. Fritts was stricken on board ship, and after three days in the hospital passed away on the morning of Oct. 8.
The gallant Young officer made a brave fight for life and health, and every effort was made to pull him through, but without avail.
The letter, bearing tender words of sympathy for the bereaved loved ones and asking that God might comfort them in their time of sorrow, set forth that Capt. Fritts would be buried in the cemetery at Brest with military honors.
News of the death of the beloved son and brother proved a crushing blow to Mr. And Mrs. Fritts and other members of the family and a great shock to his host of friends in Chattanooga. The aged father and mother are bearing up bravely, however. Since the sad news became known neighbors and friends have visited the home to offer their tender sympathies and words of consolation.
Capt. Fritts was one of Chattanooga’s best known and most popular Young men. He numbered his friends by his acqaintances. Possessing a genial, sunshiny disposition, he made friend where ever he went. He was born and reared in Chattanooga, attending the public schools, McCallie, Baylor and the Webb school. At an early age, or soon after leaving school, he became connected with Fritts and Wiehl and was secretary and treasurer of the firm at the time he offered his service to the country and flag he loved so dearly. He was a member of Centenary M.E. church, south of affiliated with a number of fraternal and social organizations. He was first commissioned as a lieutenant in the national guard and acted as recruiting officer here for a time. Later, when members of the guard were mustered into federal service, he was commissioned a captain in the quartermaster corps. He was first stationed at Atlanta. When stricken with the dread pneumonia he was on his way to Europe.
Surviving Capt Fritts are his father and mother, two brothers, King C. of this city and Lieut. William F. Fritts, who is stationed at Camp Sheridan, Ohio. Capt. Fritt’s wife, who before her marriage, was Miss Elizabeth Mynders, died several years ago. 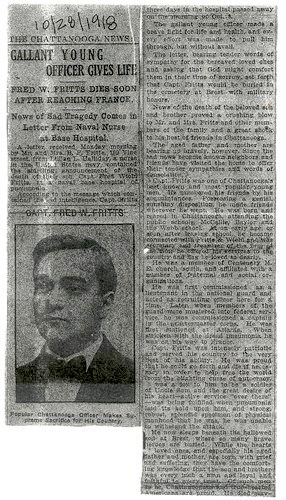 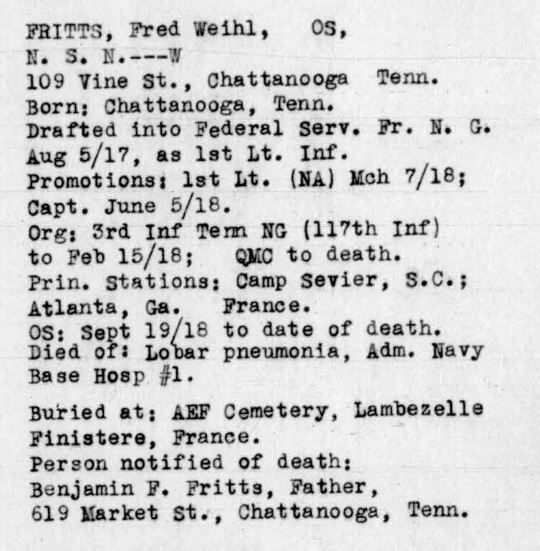