Fred Sexton was born in Paint Rock, Tennessee to William Charley Sexton and Eldora Jeffers. He was severely wounded in July 1918 and died of a gunshot wound in the stomach while on furlough on 18 November 1919.

Distinguished Service Cross Citation:
The President of the United States of America, authorized by Act of Congress, July 9, 1918, takes pride in presenting the Distinguished Service Cross Posthumously to Sergeant Fred Sexton ASN 54830, United States Army, for extraordinary heroism in action while serving with Company L, 26th Infantry Regiment, 1st Division, A.E.F., south of Soissons, France, 18 July 1918. Sergeant Sexton exposed himself to heavy machine-gun fire while leading his platoon in an attack on a machine-gun position near Missy-aux-Bois. Although wounded in the leg by a machine-gun bullet, he continued to command the platoon until again wounded on the following day. 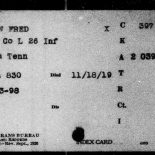 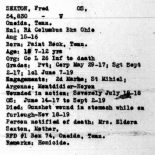