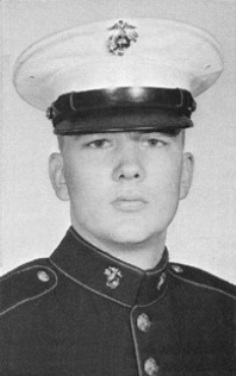 Private 1st Class Fred Stanley Lea was born on February 3, 1945, and was originally from Chattanooga, Tennessee. He served his country in the Vietnam War in the United States Marine Corps with G Company, 2nd Battalion, 4th Marines, 3rd Marine Division. PFC Lea was serving in Quang Nam province, South Vietnam, when he was killed on March 23, 1967, the victim of an explosive device under combat conditions. He was 22 at the time of his death. PFC Lea is memorialized on the Vietnam Veterans Memorial on Panel 17E, Line 26.

The photo is from his boot camp Marine Corps Recruit Depot Parris Island, Platoon 182. He earned the title “U.S. Marine” on June 28, 1966.