Private Kiser was on furlough from the Army and was travelling on Highway 33 in Claiborne County when the car he was travelling in lost control killing him and another occupant of the vehicle.

In addition to his parents he was survived by five brothers and six sisters. He was buried at Kiser Cemetery in Union County on January 12, 1942. 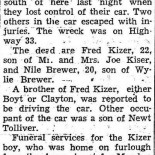