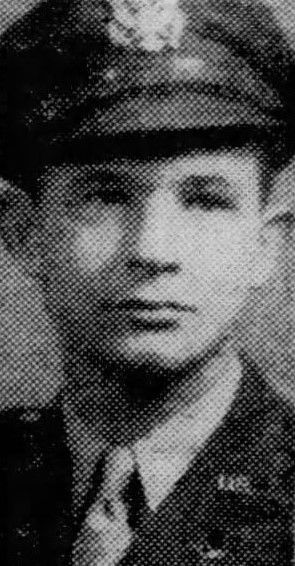 1st Lt Fred Clarence Ford was the pilot of aircraft P-47D-27 with serial number 42-27249. He departed from Etain, France on an armed reconnaissance mission to the Saarbrucken area in Germany.

Statement from 1st Lt Wiliam J. Kuntz, II
On 26 November 1944 at approximately 1515 hours in the vicinity of Schonenberg, France, I was flying Red leader position and Lt Ford was flying Red #3. We were heading East and observed 30 Me 109’s at 4,000 feet and 10 FW 190´s at 6,000 feet coming in at about 8 o’clock high. We immediately broke into the E/A and individual dog fights took place. Being greatly outnumbered I gave the order for Red flight to hit the deck and return to base. Just as I was ready to hit the deck I observed a single P-47 with two Me 109´s on his tail. I believe the single P-47 may have been Lt. Ford. I made a pass at the 2 Me 109´s and they both broke off combat. I could see no more P-47’s in the area so I hit the deck and headed out by myself. I called Red flight and told them to check in. All ships checked in including Red #3 (Lt. Ford) and that was the last I heard from him. There was light, moderate, inaccurate flak in the area.

The Tennessee Alumnus 1945
Mr. and Mrs. Fred Ford, 880 Twentieth Street, Knoxville, have received word that their son, Lt. Fred C. Ford, was killed in action over France November 26, 1944. Fred was pilot of a P-47 Thunderbolt fighter plane and had been reported missing twice – the first time, last September when he parachuted to safety and made his way back to Allied Lines with the help of the underground; the last time, on November 26, the date he was killed. He had een awarded the Purple Heart and Distinguished Flying Cross. Fred was a student in the School of Business Administration in 1937 and 1938. Besides his parents, he is survived by his widow, Mrs. Fred C. Ford, 129 South VanGilder Street, Knoxville, and a sister, Mrs. J.G. Adams of Philadelphia.

The Knoxville News-Sentinel, April 21, 1945
First Lt. Fred C. Ford, Thunderbolt fighter pilot, was killed in action in France on Nov. 26, according to delayed notification which has just reached the family here. Lt. Ford was the only son of Mr. and Mrs. C. Fred Ford, of 880 Twentieth Street and the husband of Mrs. Mord, of 129 South Van Gilder Street, a Park National Bank employe. On Dec. 16, the family was notified that the young man was missing in action as of Nov. 26. The later message says that was the date of his death. It said that the Secretary of War deeply regretted the unusual Lapse of time before the death notification. But that the delay was unavoidable.
Lt. Ford had been reported missing once before, in September. That time, however, he had parachuted to safety into enemy territory. With the aid of the underground he had made his way back to his base after 10 days, despite a knee injury. This had led his relatives to hope, when he was again reported missing, that he might return as he did the first time. After the first time he was reported missing he was awarded the Purple Heart and promoted to first lieutenant, and after the second time he was awarded the Distinguished Flying Cross which his family has received. The father is a cemetery company executive. Lt. Ford left U-T to volunteer for the Army four years ago, and after two years was transferred to the air forces. He was a veteran of many combat missions. 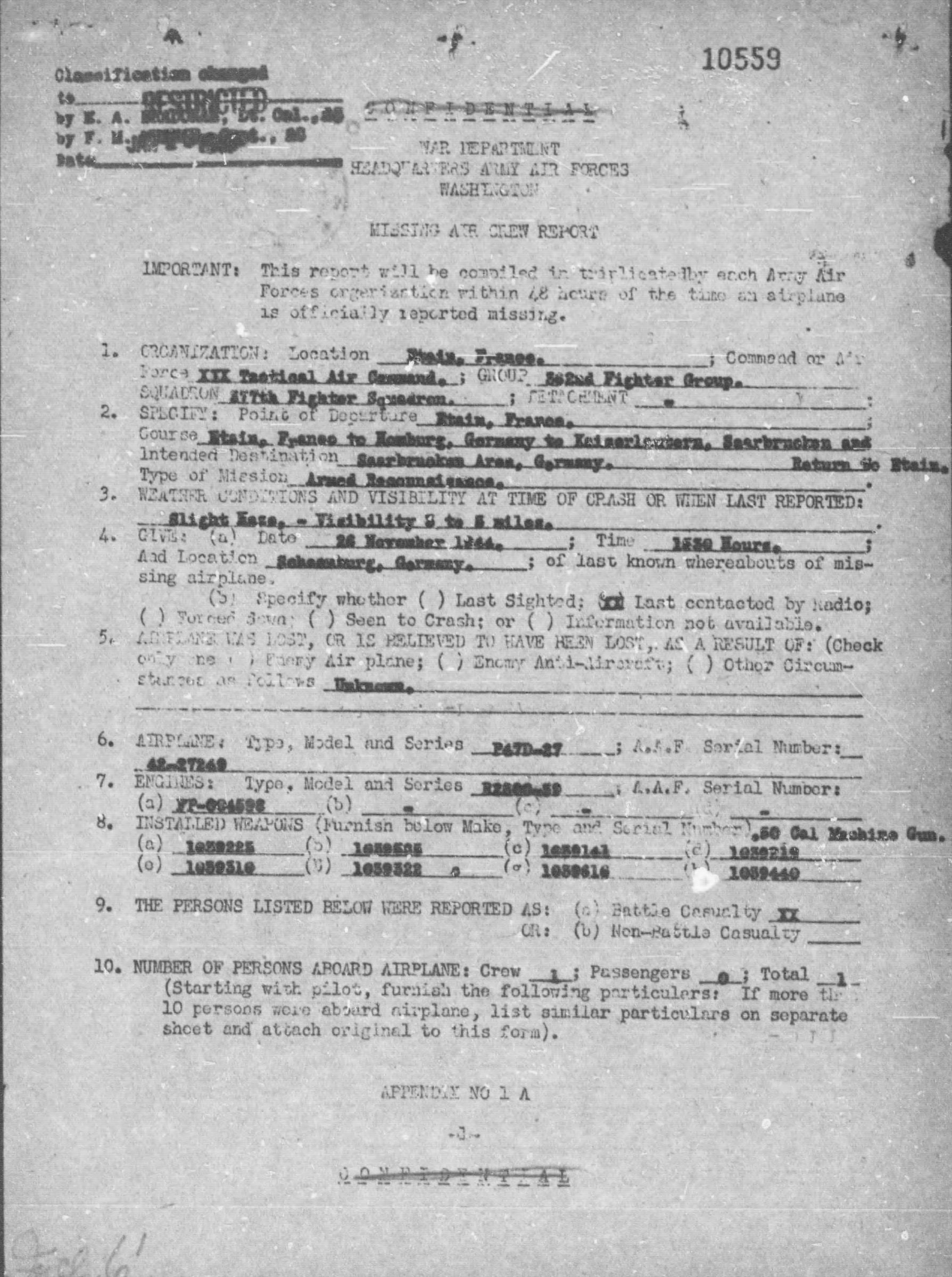 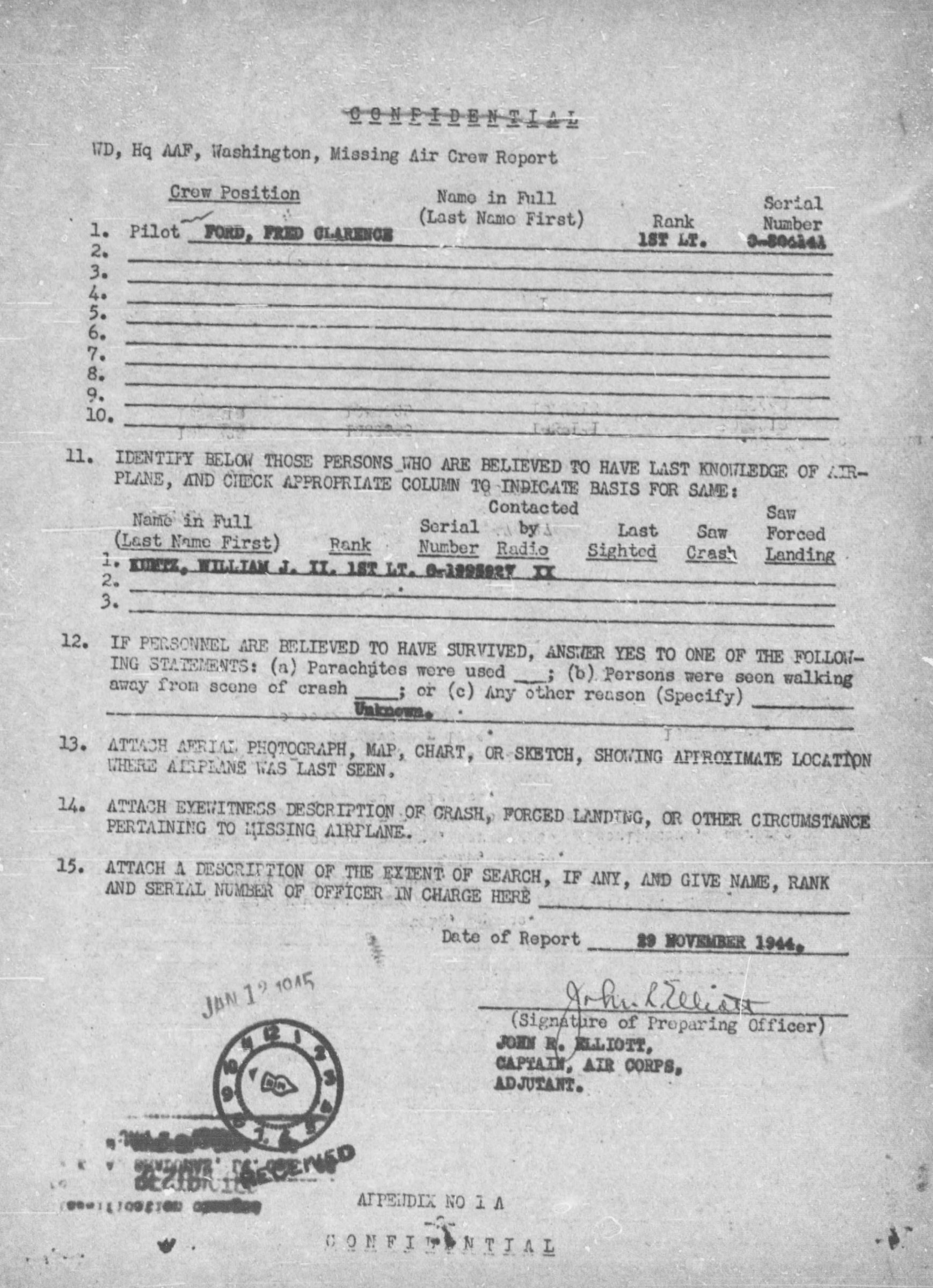 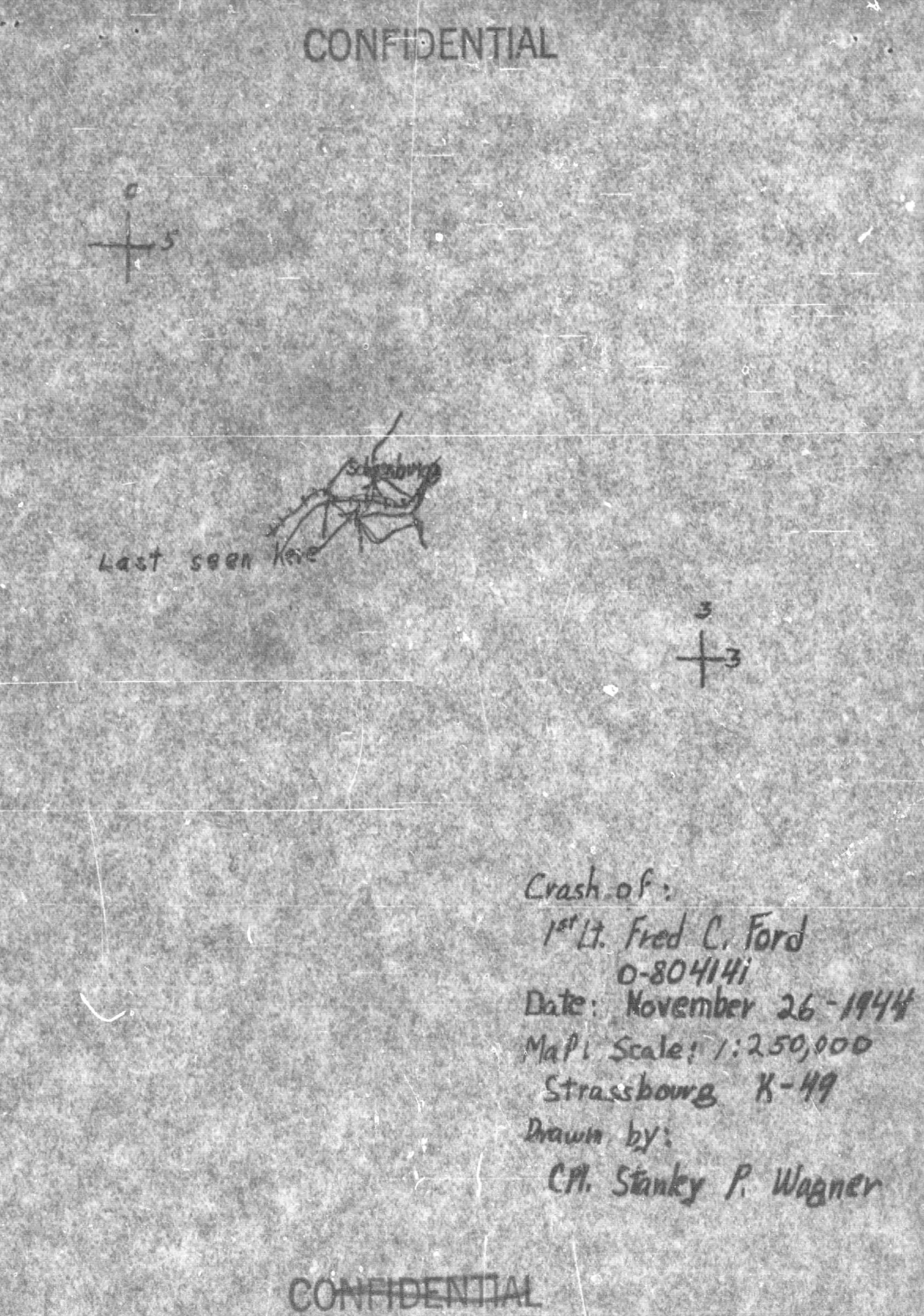 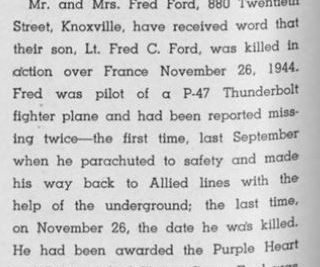 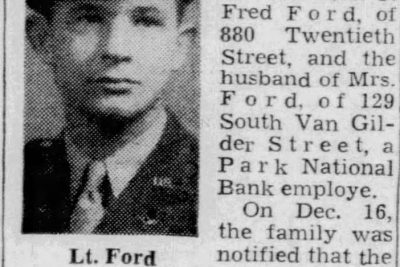 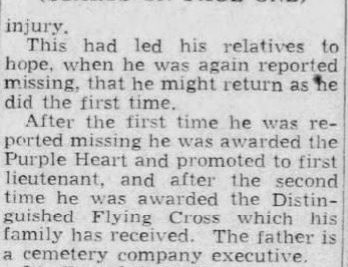 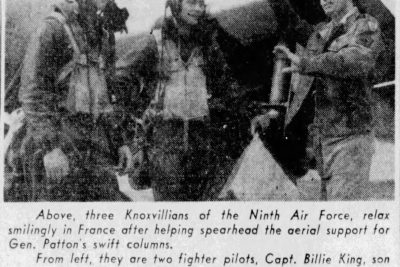