Private First Class Ferd (sometimes appears as Fred) A. Dunn (ASN 34185979) was assigned to the 17th Cavalry Reconnaissance Squadron, 15th Cavalry Group, serving in the 3rd Army. They arrived in Scotland in March 1944 and trained for the invasion of Europe. On the 5th of July 1944, the 15th came ashore at Utah beach and joined in the battle for Normandy.

He was in the point platoon when his unit was ambushed by Germans troop in the hamlet of Les Rolandières, at Dol-de-Bretagne (Brittany, France). The platoon suffered many casualties, including several POW and KIA. A monument commemorates the sacrifice of these men fallen for the liberation of the City of Dol de Bretagne. PFC Dunn was killed in action on the 3rd of August 1944, and he is interred at the Normandy American Cemetery, Colleville-sur-Mer, France, plot D, row 8, grave 11. 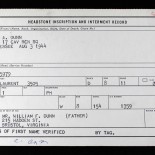 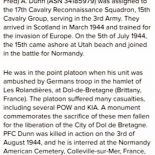 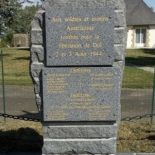