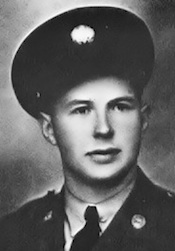 Frank was born on 23 August 1915 in the Lamar Community of Jonesborough, Washington County, Tennessee and attended Lamar School. He enlisted in the United States Army on 4 November 1940 at Fort George Wright in Spokane, Washington while working as a farm hand.

Frank was assigned to the 701st Ordnance Company (Aviation), 19th Bomb Group (Heavy), 5th Bomber Command located at Clark Air Field, Luzon Island, Philippine Islands, Western Pacific. He was taken prisoner of war (POW) by the Japanese Imperial Army after the fall of Corregidor (6 May 1942), but not reported as a POW by the Japanese until 7 May 1942.  Frank was transported from camp to camp on what was called “Hell Ships” and used as slave labor.

Frank was abroad the Japanese Ship Shinyo Maru when she was torpedoed and sunk by the USS Paddle (SS-263), a Gato-class submarine near Liloy, Sindangan Point, Zambonga Province, Mindanao Island, Philippine Islands on 7 September 1944. Of the 750 Allied prisoners of war on the ship, 668 were listed as killed and/or missing in action. Frank was 29 years old and is listed on the Tablets of the Missing, Manila American Cemetery, Manila, Luzon Island, Philippine Islands, Western Pacific. He participated in two unit campaigns: Philippine Islands and Air Offensive, Japan. Frank’s a recipient of the Purple Heart and Prisoner of War medals.  A couple of the American POW survivors from the Shinyo Maru said that the Japanese shot and killed Frank while he was trying to get off the sinking ship.

Frank was the son of Robert Ray Hartsell and Lula Jane Walters.