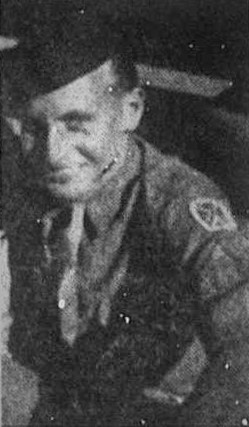 From Knoxnews.com September 9, 2013:
Wreckage in Italian lake could be vehicle where Greeneville soldier, 23 others died in WWII

ALBANY, N.Y. (AP) — Somewhere on the bottom of Italy’s largest lake lie the remains of two dozen American soldiers who died when their amphibious vehicle sank in 1945 in the waning days of the fighting in Europe during World War II. One of the missing soldiers was Pvt. Frank Tame of Greeneville.

A volunteer group’s discovery of what could be the wreckage 900 feet down in Lake Garda has given aging veterans hope that, after nearly seven decades, the remains of their comrades can finally come home.

“If you talk to the World War II guys, they’re looking for closure and they haven’t got it,” said retired Army Col. Michael Plummer, president of the National Association of the 10th Mountain Division, the Army unit that battled the Germans in northern Italy until the last week of the war. Of the association’s nearly 1,200 members, about a third served during World War II.

“We seem to save any single soldier or find anybody in the wilds of Borneo or the mountains, and we thought it was very bad that the United States wasn’t doing anything for these guys,” said 89-year-old Jerry Nash, of Hudson, N.H.

Nash was laying communication wire as the 10th Mountain pursued German forces into northern Italy’s rugged alpine region, home to the 50-mile-long Lake Garda. When the enemy blew up tunnels through the mountains ringing the lake’s northern end, the division’s commanders sent soldiers across the lake in amphibious six-wheeled trucks, known by their military designation DUKW and known to GIs as ducks.

On the night of April 30, 1945, three DUKWs left the lake’s east side carrying members of the division’s 605th Field Artillery. One of the vehicles, jammed with 25 soldiers and a 75 mm cannon, stalled during the journey and soon began taking on water. According to Cpl. Thomas Hough, the lone survivor, the soldiers desperately tossed their equipment and ammunition overboard in an attempt to keep the vessel from sinking. But the DUKW went down anyway, plunging the men into the frigid waters of the glacier-fed lake.

Soon all had drowned but Hough, a former lifeguard from Dayton, Ohio, who was rescued by two 10th Mountain soldiers on shore who heard the cries for help. Hough died in 2005.

Brett Phaneuf, a researcher from the Chester, Conn.-based nonprofit underwater archaeology organization ProMare, led an effort 10 years ago to find the sunken DUKW. Hampered by equipment issues, Phaneuf found no sign of the vehicle. But in late 2011, a local Italian group of volunteer divers started their own search. Using sonar and a remotely operated vehicle equipped with a video camera, they announced last December the discovery of a WWII DUKW sitting upright on the lake bottom.

Gruppo Volontari del Garda said it hasn’t been able to positively confirm that it’s the same DUKW that sank, killing the 24 soldiers, or one of the other two known to have sunk in the same area of the lake. The group said it plans to resume efforts to locate remains and recover the DUKW, possibly later this year or early in 2014. “Seems to us only right to do everything possible in order to restore at least someone to their land,” the group’s spokesman, Luca Turrini, said in an email to The Associated Press.

Officials at the Joint POW-MIA Accounting Command, the Hawaii-based unit that searches for remains of Americans from foreign battlefields, said they’re aware of the group’s claims but don’t plan to investigate unless there’s firm evidence that remains have been located. “If JPAC were to be provided with additional information, we would gladly look into it more,” Lee Tucker, a spokesman at JPAC’s Pearl Harbor headquarters, said in an email to the AP.

The family of Pvt. James Hilley would like to see his remains recovered and returned to his hometown of Calhoun Falls, S.C. When his great-nephew, Matthew Hilley, learned of the Italian group’s discovery in December, he showed his aging relatives the video of the DUKW on his smartphone. It was a particularly emotional moment for 86-year-old Jewell Scott, James Hilley’s sister. “She said, ‘I prayed over and over and over again that we would find James before I passed away,'” Matthew Hilley said.

For Nash and the division’s dwindling number of World War II veterans, the determination to recover the lost soldiers’ remains hasn’t diminished with the passage of time. “It’s the old story,” he said. “You never leave any man behind.”

A list of the 24 soldiers in the 10th Mountain Division who died when their amphibious vehicle sank in Italy’s Lake Garda on April 30, 1945, during World War II. An asterisk indicates soldier’s hometown isn’t available–

For a related article see:
http://www.csmonitor.com/World/Global-News/2012/1213/Duck-boat-sunk-in-World-War-II-found-in-Italian-lake