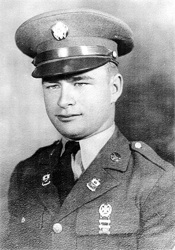 Private First Class Frank M. Clabough was born on June 29, 1917. His parents were Henry Wilson Clabough and Georgia Oakes Clabough. He was married to Novella R. Clabough. He served in the Pacific Theater in the 128th Infantry, 78th Division. He served in Boca del Toras, Panama, and New Guinea. He was killed in action in New Guinea on July 9, 1944. He is buried next to his wife in Riverdale American Legion Cemetery in Muscogee County, Georgia (Section E, Row 4, Plot 5).