Staff Sergeant Frank Godsey US Army Air Corps was serving in the Philippines at the time of the Japanese invasion. He was captured and survived the Bataan Death March to the Cabanatuan POW camp.

Surviving there until the Japanese decided to move him and 1619 other POW’s to Japan. They were loaded onto the Japanese hellship Oryoku Maru in Manila and departed from there on the 13th of December 1944. It was located on the 14th by aircraft of the USS Hornet. The unmarked ship was repeatedly attacked as it moved up the West Coast of Bataan. On the 15th the Hornets aircraft returned and sank the ship off the coast of Olongapo. Surviving POW’s were allowed to jump overboard and swim to shore. Those that survived were loaded onto the Enoura Maru and the voyage continued to Takao Harbor Formosa. The ship was located there by planes from the Hornet and sunk on 9th of January 1945.

Staff Sergeant Godsey was not among the survivors placed on the next hell ship. He is remembered on the Tablets of the Missing, Manila American Cemetery, Philippines. 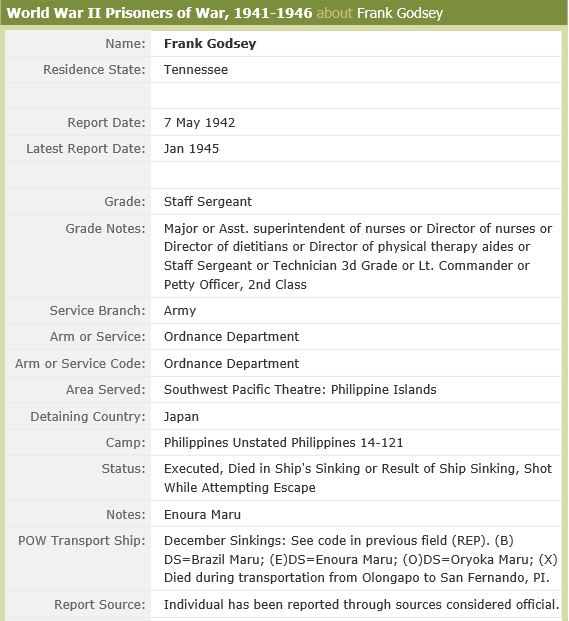