Private First Class Frank D. Goodwin Jr. #14063639 US Army Air Forces was assigned to the 63rd Bomber Squadron, 43rd Bomber Group H, a B-24 squadron. The unit was in the Pacific Theater of operations.

PFC Goodwin was given a finding of death on the 17th of December 1945. He is remembered on the Tablets of the Missing at the Manila American Cemetery in the Philippines.

Private First Class Frank D. Goodwin Jr. was assigned as a Photographer on board B-17F on the 8th of May 1943.
From Pacific Wrecks
Mission History
Took off from 7-Mile Drome near Port Moresby at 0640am on an armed reconnaissance mission to Madang and Saidor on the northern coast. Its last reported position was 50 miles north of Madang, when it reported Japanese shipping, at 0900 hours, then never reported again. Subsequent searches both at the time and after the war yielded no signs of the crew and plane.

Some members of the 63rd BS heard that Radio Tokyo reported an incident on the 8th of May in which a Japanese fighter pilot had rammed a B-17. This led to speculation that this was the cause of Keats otherwise unexplained loss.

Japanese Side
In fact, at 913am this B-17 was intentionally rammed by an attacking Ki-43 Oscar, claiming his life.

Wewak – The Early Days by Richard Dunn adds
…nine Type 1 fighters of the 11th FR under Capt. Takashi Ninomiyo, commander of the 1st chutai. These encountered the B-17 while en route to cover the ships. Three Type 1 fighters under Lt. Junji Kobayashi broke off and attacked the B-17 initiating their first pass from slightly above and then completing additional head on passes. Though damaged, the B-17 headed for some of the clouds and rain squalls in the area. Unwilling to let the B-17 escape, Sgt. Tadao Oda commenced a head on pass that ended in a collision. Both the B-17 and the fighter fell into the sea in flames. There were no survivors. The Americans had no idea what happened to the B-17 flown by Lt. Robert Keats and his crew. Oda was lionized in the Japanese press for deliberately ramming and destroying the big bomber. He was promoted to Lieutenant posthumously. 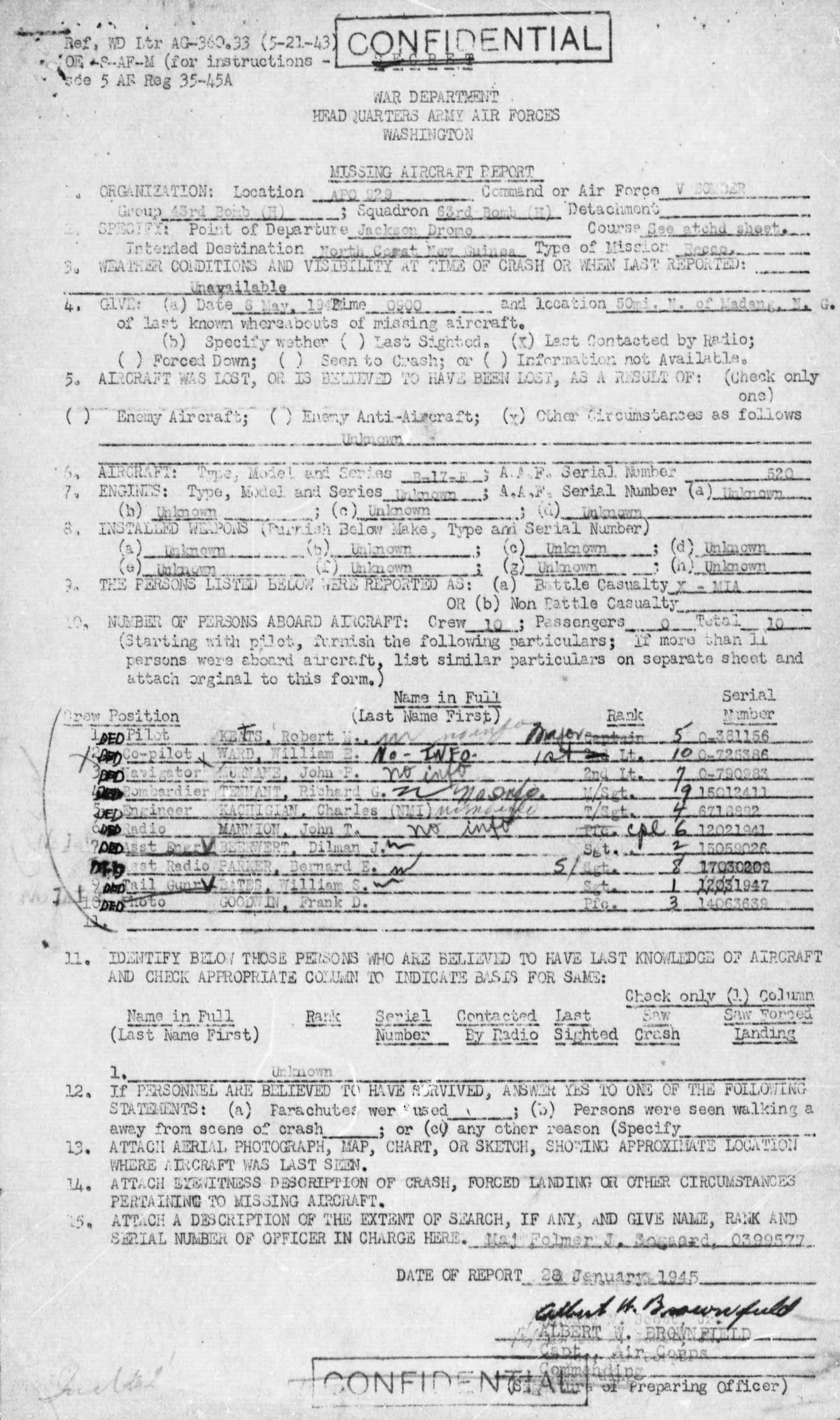