Foy Lee Price was born in 1912 and is memorialized on the Tablets of the Missing at Honolulu Memorial in Hawaii   He is also memorialized at the Maple Lawn Cemetery, Highway 11E, Jonesborough, TN

On 7 June 1942, six B-24D Liberator bombers and their crews were loaned to the 28th Composite Group in Alaska to conduct air combat missions against the Japanese in the Aleutians, Foy was a gunner on one of those crews. He was on a bombing mission with his crew aboard B-24D Liberator #41-63752 on 30 March 1943, when it was hit by Japanese anti-aircraft fire over Kiska Island, Aleutian Islands, Alaska. The bomber went down in the Bering Sea and was never seen again. Foy participated in three Unit Campaigns: Antisubmarine; Air Offensive, Japan and the Aleutian Islands. He was awarded the Purple Heart medal and received the Air Medal with Oak Leaf Cluster. 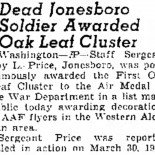