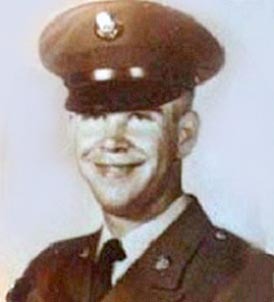 Private First Class Floyd Steve Harmon was a casualty of the Vietnam War. As a member of the Army Selective Service and a Draftee, PFC Harmon served our country until February 24th, 1966 in South Vietnam. He was 22 years old and was married. Floyd died from small arms fire or grenade. His body was recovered. Floyd was born on January 1st, 1944 in Banner Elk, North Carolina. PFC Harmon is on panel 05E, line 072 of the Vietnam Memorial Wall in Washington D.C. He served our country for less than a year.

I only knew him through letters. I was a kid who wrote to a soldier and learned about a war far away. I hope someone still thinks about him. I have remembered, and always will.
-Rena Van Breukelen

He was the husband of Mrs. Lois Walsh Harmon, 304M Church Street, Valdese, NC, formerly of Butler, TN. Floyd is the son of Floyd & Blanche McGuire Harmon. He was one of nine children.