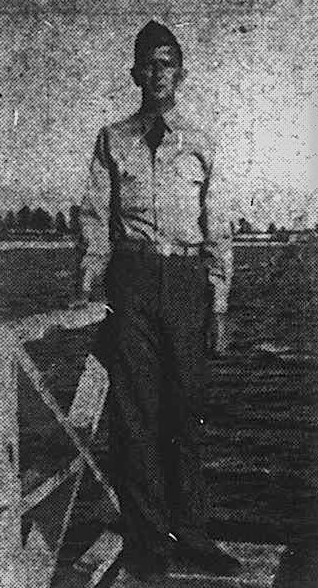 The Kingsport News, 1 October 1948
Funeral services of Floyd Benson Smith of Hawkins County, who was killed in action overseas November 4, 1943, will be held Sunday at 2 p.m. at McPheeter’s Bend Baptist Church. The Rev. A. W. Parker and the Rev. W. H. Pangle will officiate. Burial will be in the church cemetery with Hammond Post No. 3, American Legion, in charge of military rites at the grave. Private First Class Smith was a member of the artillery. He entered the service in April, 1941, trained at Fort Bragg, N. C., and went overseas in August, 1942. He was born in McPheeter’s Bend section of Hawkins County, where he attended school and later engaged in farming. He was the son of James N., and the late Mollie Sellers Smith, in addition to his father, two brothers, Marvin and and Allie Smith, and two sisters, Mrs. Julia Hayes and Mrs. Blanche Gray, all of Church Hill, survive. The body will be removed from Hamlett-Dobson Chapel to the father’s home Saturday afternoon and remains there until time for the the funeral. It arrived in Kingsport last Tuesday, accompanied by military escort. Pallbearers will be Mack, Carl, Daniel, Glenn and J. T. Smith, Ross Cavin, Carl Crawford, and Howard Bailes.

Rogersville Review, September 30, 1948
The body of Pfc. Floyd B. Smith, who was one of the first casualties from Hawkins County in World War II, arrived in Kingsport Tuesday morning accompanie by a military escort. The body was later taken to the home of his father, J.N. Smith who resides at McPheeter’s Ben.
Pfc. Smith was killed in action in Italy on November 4, 1943. He was serving in the Field Artillery, and had been in the Army two years and nine months at the time of his death. He had been overseas 16 months and was in the African and Sicilian campaigns. He left Rogersville in the first draft. 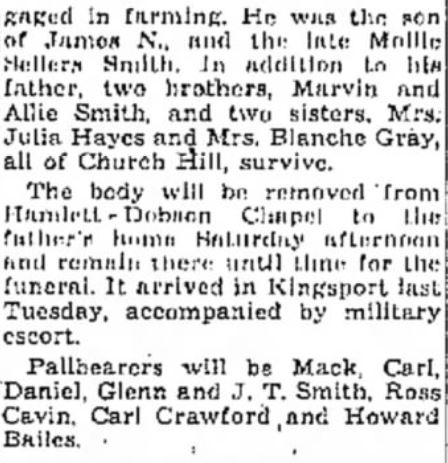 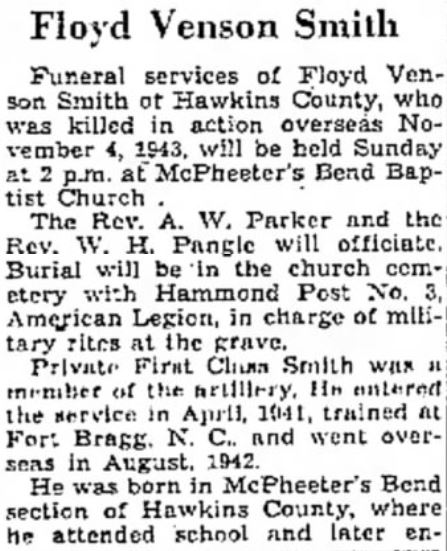