On 12 February 1943 this aircraft was on a Armed Reconnaissance mission to New Guinea Area – Wewak. No ETA or message was received from the aircraft. Radar stations picked up an unidentified aircraft and was last heard 50 miles off Hood Point near Brisbane Australia.  It is believed that the aircraft failed to turn on proper course and crashed into the Ocean. The crew were officially declared dead on January 21, 1946. 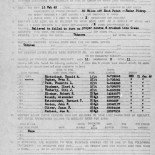 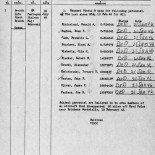