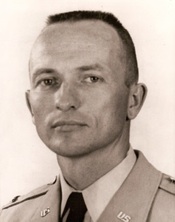 The President of the United States of America, authorized by Act of Congress, July 9, 1918 amended by act of July 25, 1963, takes pride in presenting the Distinguished Service Cross Posthumously to Captain Infantry Eugene Delano Franklin ASN 0-4062708, United States Army, for extraordinary heroism in connection with military operations involving conflict with an armed hostile force in the Republic of viet. On 24 June 1965, Captain Franklin was serving as Senior Advisor to the 1st Battalion, 45th Infantry Regiment, 23d Infantry Division, Army of the Republic of Vietnam, whose mission was to locate and destroy a hostile contingent which had earlier seized a civilian convoy. As the 1st battalion proceeded in convoy along National Highway 21, they were ambushed by a well-concealed and strategically located Viet Cong unit which had secured control of over two miles of the highway and neighboring terrain. Immediately upon receiving the initial barrage of hostile mortar, automatic weapons, and small arms fire, Captain Franklin, with complete disregard for his own personal safety, moved forward to locate hostile positions and evaluate the over-all situation. After personally accounting for the destruction of two insurgent positions, he moved among the friendly troops, giving advice, encouragement, and accurate fire direction guidance. After achieving a stabilization of his forces, Captain Franklin rallied the embattled battalion to move forward, take the offensive, and dislodge the hostile force from their tactically superior positions. As Captain Franklin moved forward with the maneuver elements of the attacking friendly force, he was mortally wounded by a hail of hostile fire which had been directed towards his advanced position for more than forty-five minutes. Captain Franklin’s extraordinary heroism, gallantry in action, and supreme sacrifice were in keeping with the highest traditions of the United States Army and reflect great credit upon himself and the military service.