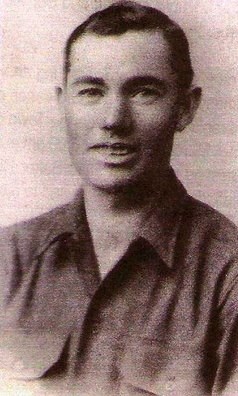 Ethon Davis was the son of William Thomas Davis and Mary Ann Childress. Husband of Evelyn Douglas. He enlisted on 16 January 1942 at Fort Oglethorpe, Georgia. He died July 10, 1944, in France.

The Knoxville Journal, November 20, 1944
Sgt Ethon Davis, son of Mr. and Mrs. W.M. Davis of Pioneer, was killed in action in France, July 10, according to a recent message from the War Department. Sergeant Davis has been in service two years. His wife, Mrs. Evelyn Davis and small son, Ethon Samuel, are making their home at Elk Valley.

The Scott County News, 30 July 1948
Davis, Ethon, Sgt – Sgt. Ethon Davis to be buried next Sun. – Body arrived in Oneida Wednesday from overseas –
The body of Sgt. Ethon Davis, aged 24, who was killed in action in France on July 10, 1944, arrived Oneida Wednesday and was taken to the Cooper Funeral Home where it will remain until Sunday afternoon, then be taken to the home of his wife, Mrs. Everlyn Davis, of Huntsville. Funeral services will be held at the Huntsville high school Sunday at 1:00 p.m. with Revs. J.W. Wright and T. R. Douglas officiating, assisted by the American Legion. Survivors include his wife, Mrs. Evelyn Davis of Huntsville; one son, Ethan Samuel; parents, Mr. and Mrs. W.M. Davis of Huntsville; one brother, Arlie Davis of Huntsville; three sister, June and Jewel Dean of Huntsville and Mrs. J.P. James of Ethridge, Tenn. 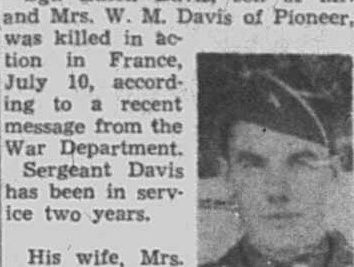 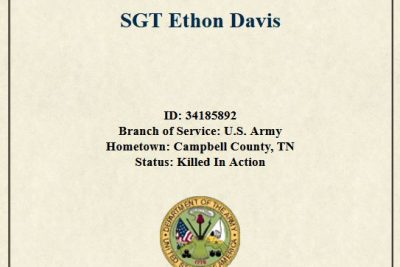