Fireman 1c Ernest Lester Howard U.S. Naval Reserve, was the Son of Mr. and Mrs. Wilson Pocket Howard, Rt. 8, Sevierville, Tennessee. He was shipped aboard the USS Chevalier DD-451, and served in the Pacific against the Imperial Japanese Navy.

The Dictionary of American Naval Fighting Ships described the Chevalier’s final battle:
“On 6 October 1943 Chevalier, O’Bannon (DD-450), and Selfridge (DD-357) intercepted nine Japanese destroyers and destroyer transports attempting to evacuate troops from Vella Lavella, Solomon Islands. Although greatly outnumbered, the American destroyers attacked. After firing half of their torpedoes and scoring several hits with gunfire, the group continued to steam into the line of fire of enemy torpedoes in order to keep their own guns bearing. At approximately 22h05 Chevalier was struck on the port bow by an enemy torpedo which tore her bow off to the bridge, throwing the ship entirely out of control. The destroyer O’Bannon which was following Chevalier could not avoid the damaged destroyer and rammed her in the after engine room, flooding that space and stopping Chevalier’s port shaft. While making preparations to abandon ship, Chevalier’s skipper ordered the torpedoes in her tubes to be fired at the Japanese destroyer Yugumo. The burning Japanese ship blew up soon after. By 23h26 it was apparent that Chevalier could not be saved and “Abandon Ship!” was ordered. Her crew was picked up by O’Bannon’s boats, and Chevalier was sunk the following day by a torpedo from a friendly destroyer. Her severed bow was located about a mile to the west and was sunk with depth charges. Chevalier lost 54 killed, and suffered 36 wounded.”

F1c Howard was declared missing 6 October 1943. Later, officially declared dead 7 October 1944, as killed in action. He is memorialized on the tablets of the missing at Manila American Cemetery, Philippines. His awards include the Purple Heart and Asiatic Pacific Campaign Medal w/3 stars. 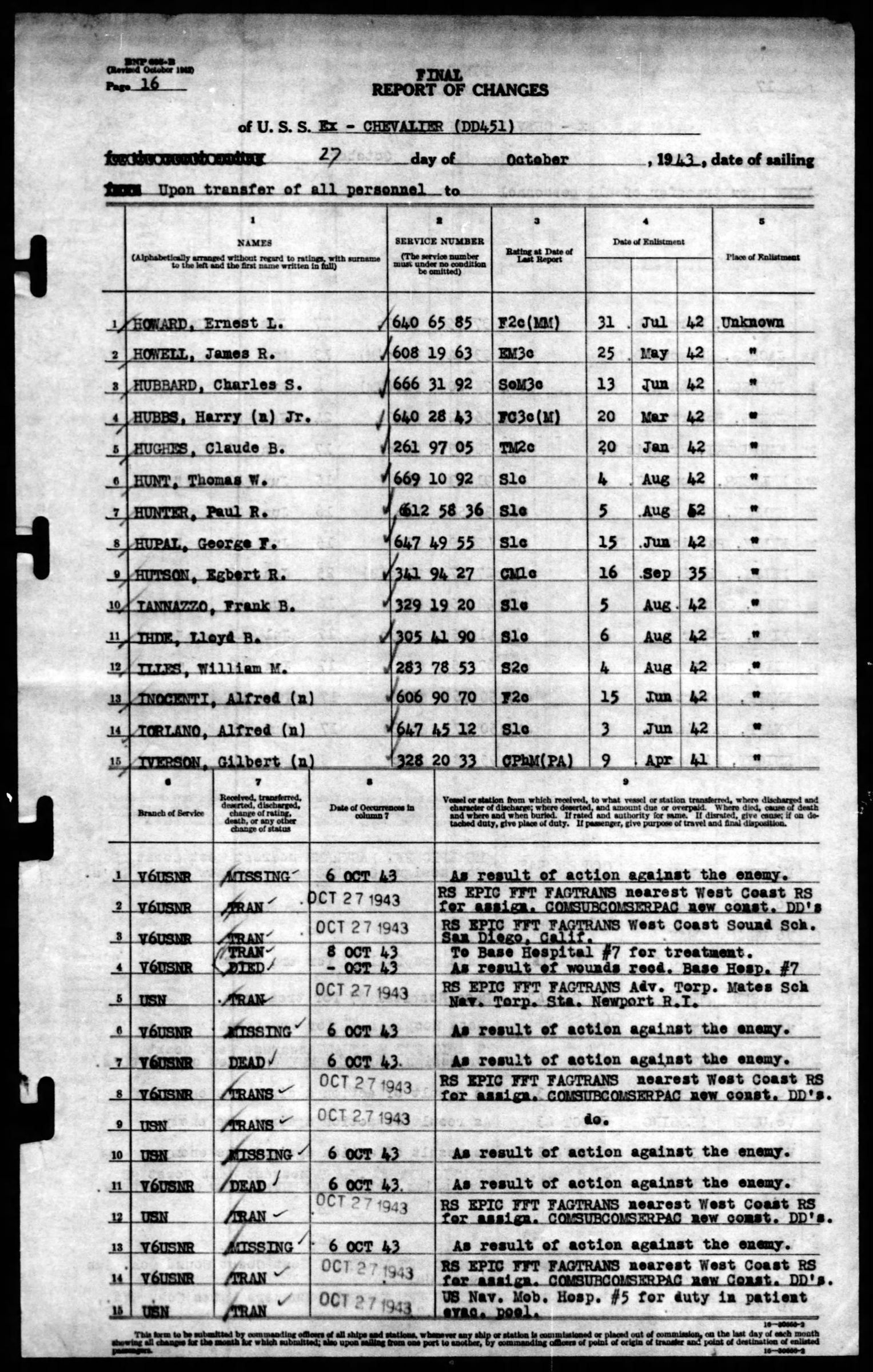