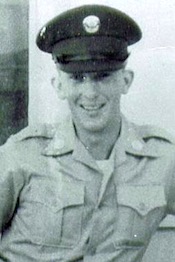 Specialist 4 Ernest L. Gibson was born on March 22, 1943, and was originally from Pioneer, Tennessee. He served his country in the Vietnam War in the United States Army as an infantry direct fire crewman in C Company, 4th Battalion, 9th Infantry, 25th Infantry Division. He was a 4 year veteran of the Army when his tour in Vietnam began on April 16, 1966. On August 8, 1966, SP4 Gibson was killed under hostile conditions in Tay Ninh province, South Vietnam at the age of 23. He is buried at Fairview Memorial Gardens in Huntsville, Scott County, Tennessee, and is memorialized on the Vietnam Veterans Memorial on Panel 09E, Line 112.