The Kingsport Times, 28 December 1943
PFC Earnest Eugene Ligon, 20, son of Willie L. and Jeanette Ligon, of 13 Carver Street in Riverview, died while on foreign service in the New Hebrides Islands on December 12, his parents were advised Monday in a telegram from the War Department.
The wire did not give the cause of death or say whether it occurred while in action or not. The soldier was a member of an anti-aircraft battalion and entered the service of his county on October 2, 1942. He also married about a year ago.
The father is one of the most widely known Negroes living in Kingsport, having been employed for some years as a painter by the Craft Motors, Inc. His mother is also well known and is connected with the leading colored families of Rogersville.
Besides his parents, PFC Ligon is survived only by his wife, Helen Ligon. The War Department telegram said further details would be sent to the family later. 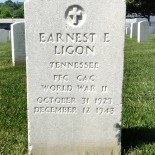 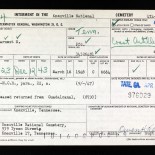 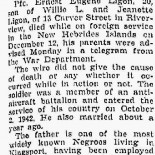