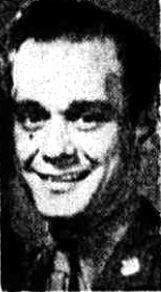 First Sergeant Emmette B. Carter was assigned to the 61st Armored Infantry Battalion, 10th Armored Division. On 20 February 1945 following rest and replacement, the 10th Armored attacked the German lines, broke through, and drove 85 miles in 48 hours to the Saar River.

1st Sgt Carter was killed in action on 20 February 1945 and is interred at C,5,15, Luxembourg American Cemetery, Luxembourg.

Mr. Sarah Walker of Kingsport, his aunt, had raised him since childhood.

“When the Japanese attacked Pearl Harbor, Emmette B. Carter was stationed at Arlington, Va. He soon found himself on a troop transport for Europe. Once there, he was assigned to the 61st Infantry Battalion, 10th Armored Division of the famed Seventh Army under the command of General George ‘Bood and Guts’ Patton.

Emmette Carter fought for almost four years in the European conflict and emerged from the fighting without serious injury until–Feb. 20, 1945. On that day, shortly after participating in the battle for control of the Rhine, Carter was standing in a muddy field while waiting for a patrol to form. A German 88-millimeter shell struck several feet away, killing him instantly.

His platoon leader, a lieutenant, whose name has long been forgotten but whose words still linger in the minds of those who loved Emmette Carter, wrote to the person who had raised him since childhood, Mrs. Sarah Walker of Kingsport, his aunt: ‘It was my privilege to know and serve with First Sergeant Emmette B. Carter,’ the letter began. ‘In the months that he was a member of my command, I came to know him as fine and brave soldier who was admired and respected by all those who came in contact with him.’

HIs aunt was to recall later that the great majority of persons who came in contact with Emmette Carter felt the same way.

He was born in Coeburn, Va., on May 3, 1920. His father died when he was very young and his mother was forced to go to work to support her two children, Emmette and his sister, Lucille. So the boy might enjoy the advantages his mother found it hard to provide, his father’s sister and brother-in-law, Mr. and Mrs. Ira Walker traveled to Coeburn and brought him back to Kingsport.

The Walkers and Emmette made their home at 21 Edgewood Village and the boy began his education in the city schools of Kingsport. He entered Dobyns-Bennett High School in September 1934, and while there was an average student. The school’s records do not show why he left school after completing his sophomore year in 1936.

He volunteered for the Army in 1937 and after basic training, was stationed in the Panama Canal Zone. After a three year tour in Panama, Carter returned to Kingsport and married his high school sweetheart. The marriage ended unhappily in May 1941 in Arlington when the couple was divorced, and shortly after Carter had reenlisted.

After his death, Emmette Carter was buried in the American Cemetery and Memorial in Luxembourg, where white crosses by the thousands stand in mute testimony of the supreme sacrifice made by those who fought in the Battle of the Bulge and the ‘watch on the Rhine.'” 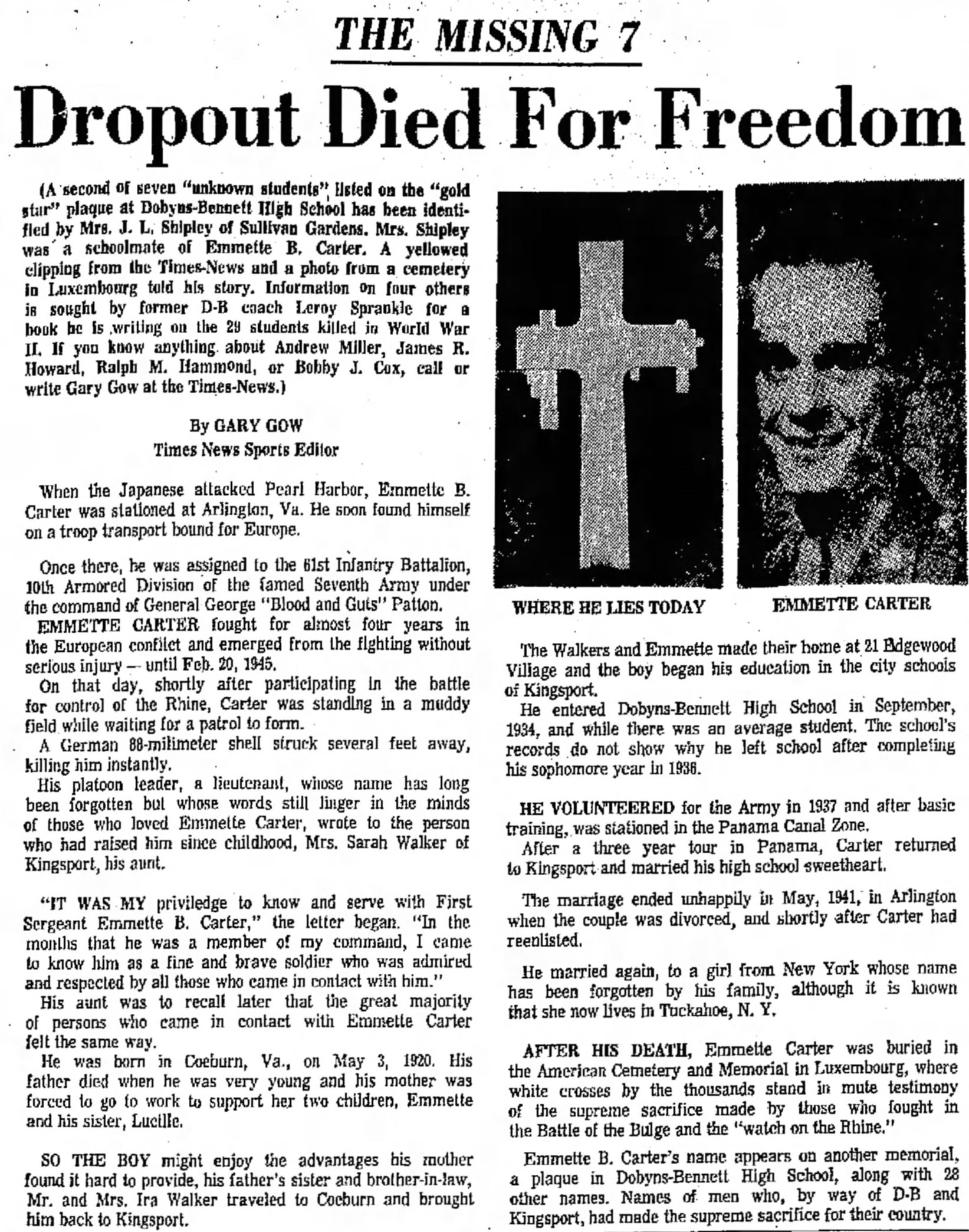 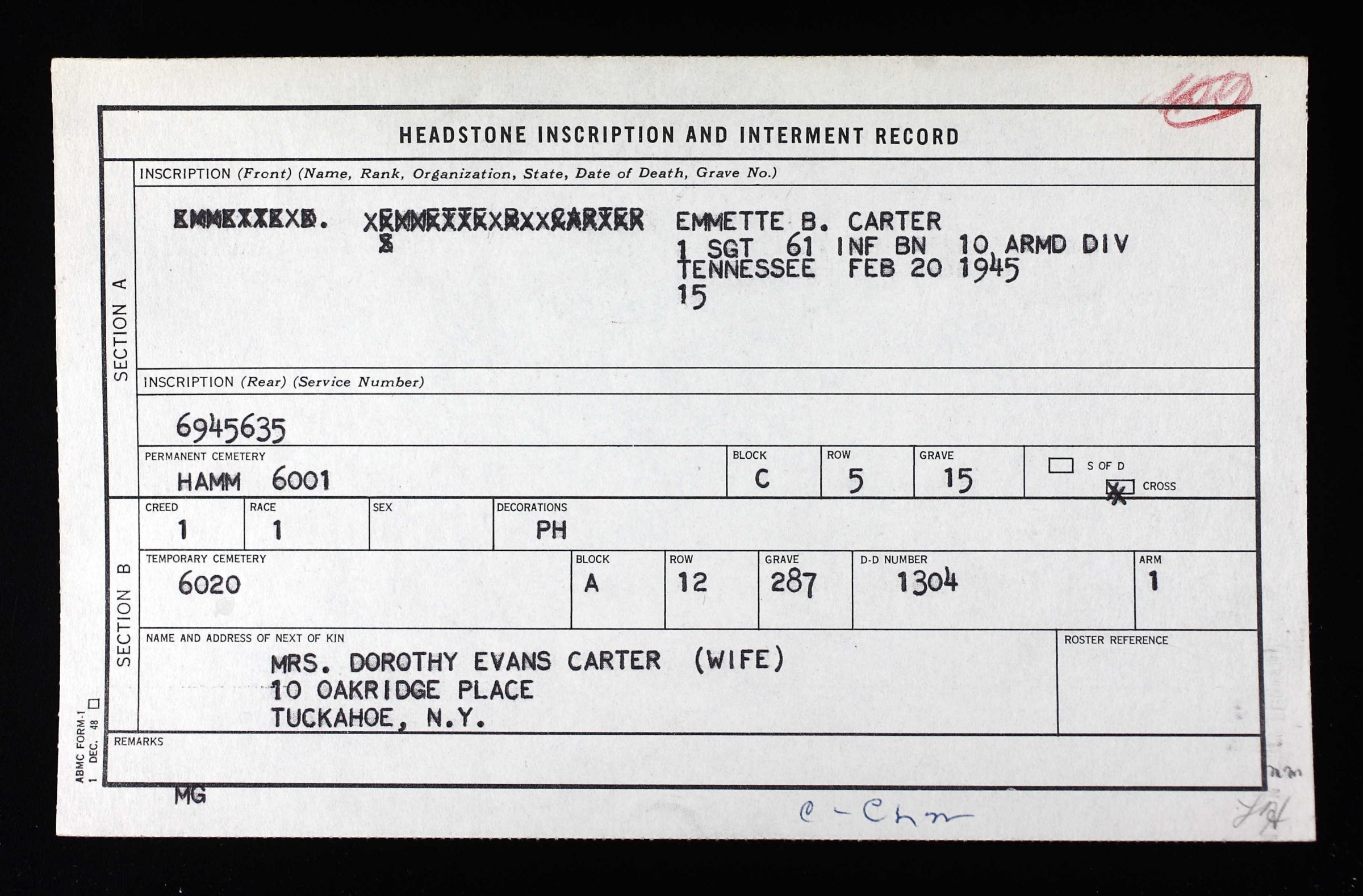