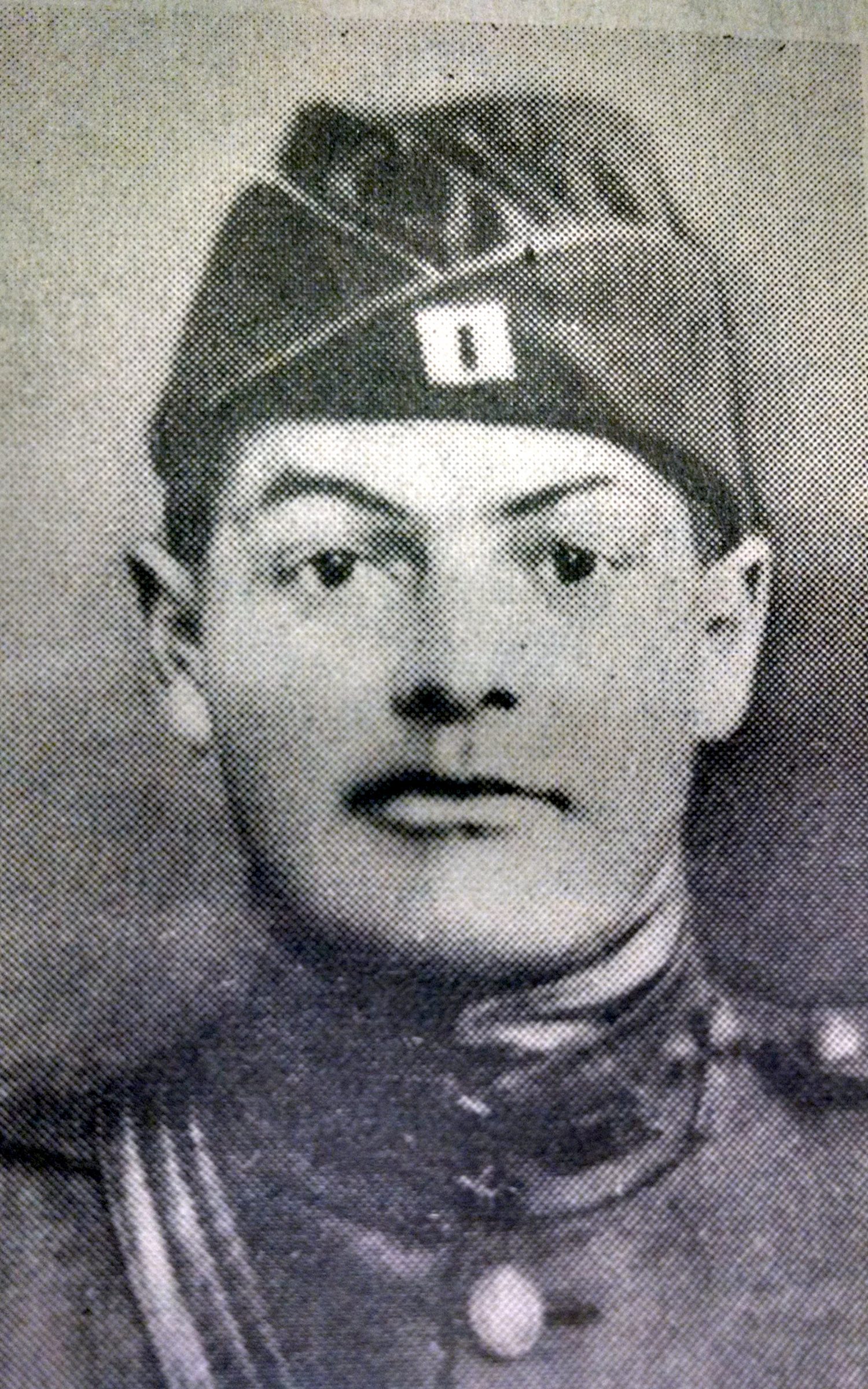 Emerson Jefferson Lones was the son of Jefferson G. Lones and Mary C. Looney. Husband of Myrtis Montgonery Anderson and of Nell Edmondson French, whom he married July 5, 1917 in Blount County, TN.

Captain Lones served with Company B, 117th Infantry Regiment, 30th Infantry Division and was killed in action on the Hindenburg Line.

Maryville Enterprice, October 24, 1918
Another gold star, the emblem of supreme sacrifice must be added to Blount County’s service flag. This time the noble son who offered his all that he world might be saved from the terrors of the Hun is Captain E.J. Lones, leader of our Blount County boys of Company B, 117th Infantry. Details are not yet available, but the information that he fell as he led our boys over the top September 29. It is probable that within the next few days letters may be received telling of the action and the manner in which death resulted. Nearly a month has elapsed since the battle, but the terrible pressure under which all departments are working in the field makes it possible to forward information more speedily, it seems. The first word regarding Captain Lones’ death came in a roundabout way. Captain Stannis of Knoxville wrote his wife that among the killed in the battle of September 29th was Captain E.J. Lones of Maryville and Major Wyrick wrote his wife that perhaps the only one of the killed that she would know was Captain Lones. Following the receipt of this information Postmast Jas. M. Cates wired Senator Shields in Washington to ascertain if anything in the war department was available. In response to this message nothing has been received. Up to the recept of the last letters from members of Company B, not a man had been wounded. There had been many narrow escapes, and it was miraculous that none had been hurt. This may be due to the fact that Captain Lones was such an efficient officer in the field. As a national guard officer his superiors frequently commented on his ability to protect his men, yet place them in positions where they would be doing fearful execution to the enemy. Perhaps no captain in the state was as capable of handling men in the field as Captain Lones. In August he wrote The Enterprise a letter in which he said, “I want all the good people at home to know that I shall do my utmost to take good care of their sons that are under my charge. I fully know that they realize that in war some must be killed, but I feel that old B is ready for anyway the Lord feels disposed to place us. **** We ask that you always remember us in your prayers, for we are thinking of you at home and longing and hoping for the happy day when we can come home a victorious army who has set the world free from the German Hell.”
Captain E.J. Lones has been in the fighting service of the nation for seventeen years. In 1901 he entered the regular army, remaining there till 1907. From private he progressed to corporal, then sergeant and quartermaster sergeant, then first sergeant and expert gunner in the coast artillery. Returning to civil life he organized Company B of the old Third Infantry of Tennessee, and was commissioned captain in October 1911. His commission was signed by Gov. Ben Hooper. As captain of the company he built up an organization that ranked first in the state camps and inspections. Captain Lones sacrified much time and money, and devoted a great deal of energy to making the company what it was. When the government needed troops on the Mexican border in 1915, Company B was mustered into the federal service, and headed by Captain Lones served along the border at various points. It was only a short time after the troops returned from the border that the call for service against Germany was made and Captain Lones and his faithful men responded as volunteers. After drilling in Maryville for serveral weeks, they were called to Camp Sevier, and thence to Europe.
When it was evident that the company was to be sent to training camp soon Captain Lones and Miss Nellie Edmondson were married, the date being July 4, 1917. Mrs. Lones went to Greeneville, South Carolina, after the company was called to Camp Sevier, and remained there till the regiment was ordered to France, enjoying the company of her husband every minute he could spare from his military duties.
In addition to the widow, Captain Lones leaves his father and mother, Mr. and Mrs. J.E. Lones, two brothers, Frank and Looney, the latter a sergeant in his company in France, one sister, Mrs. Water B. Counts, and a little daughter, Ernestine, the child of a former marriage. 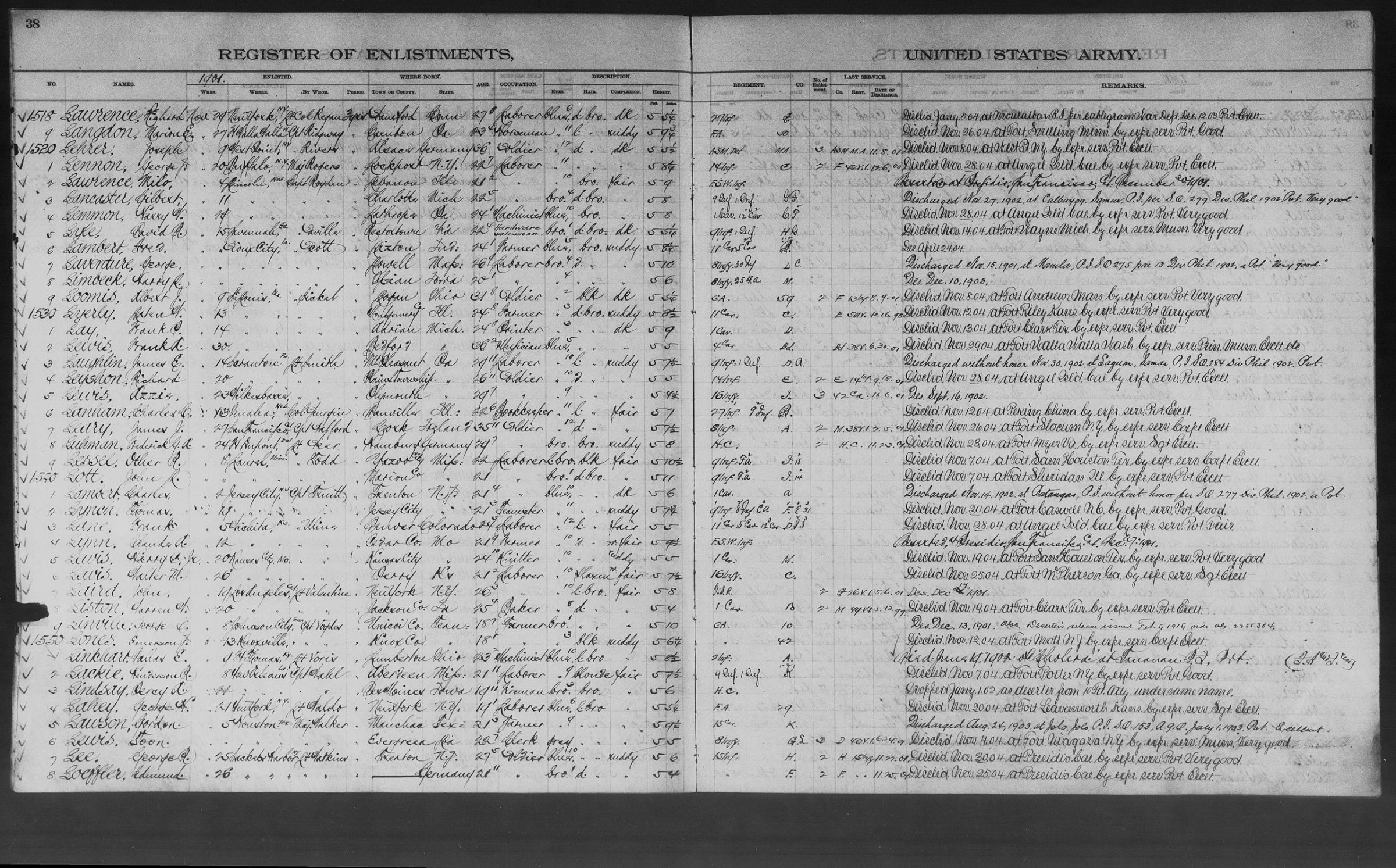 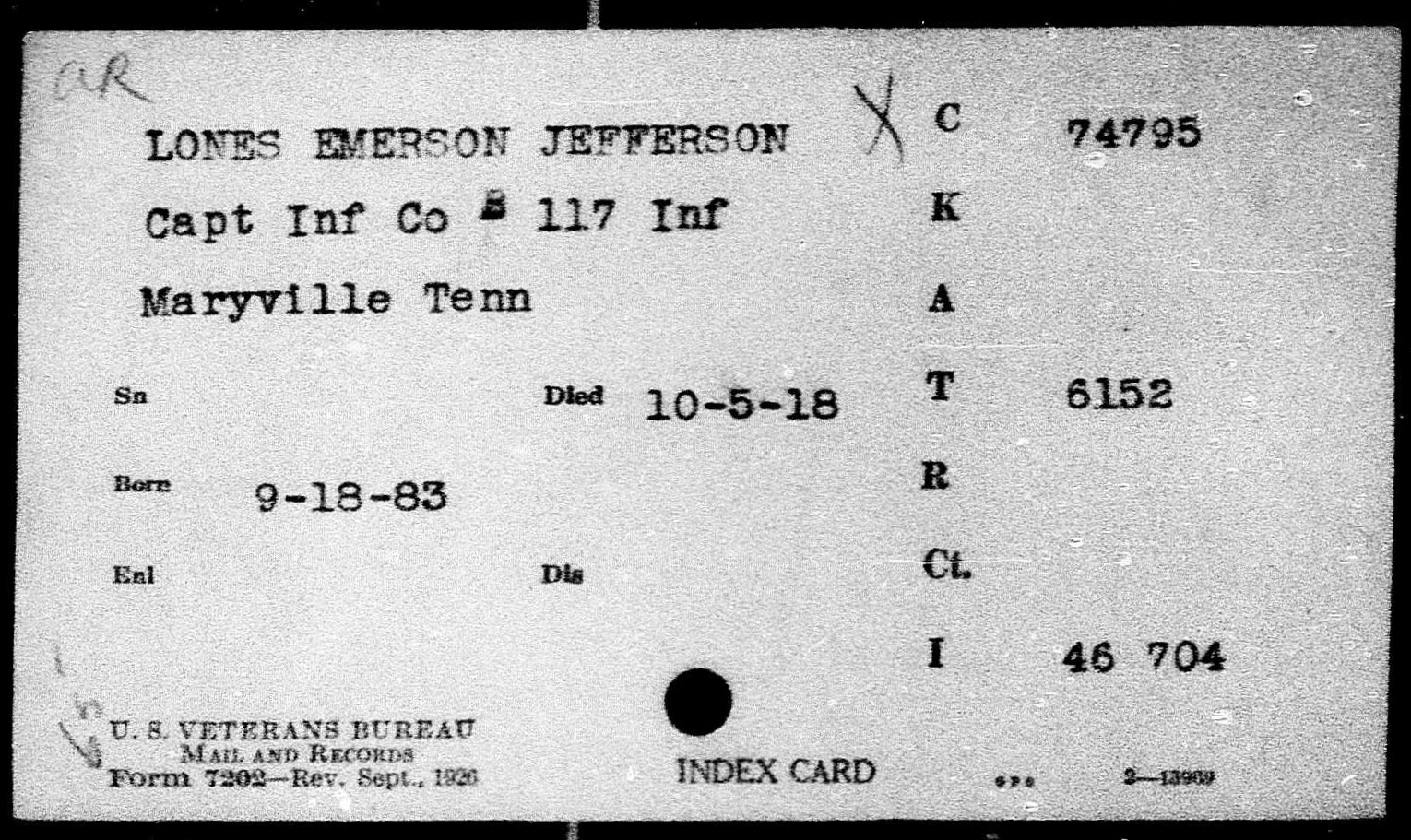 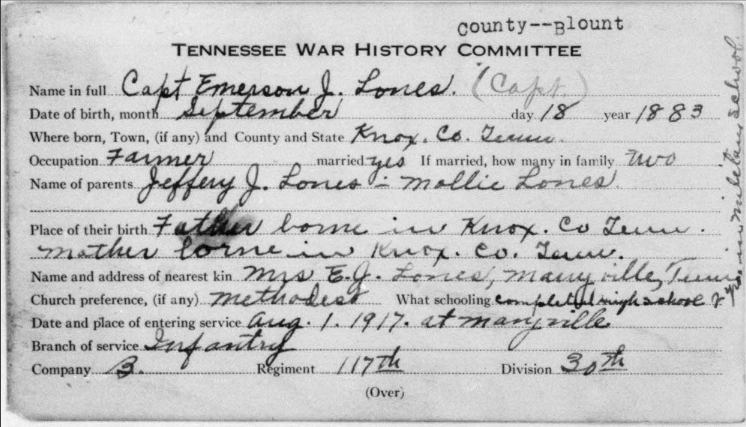 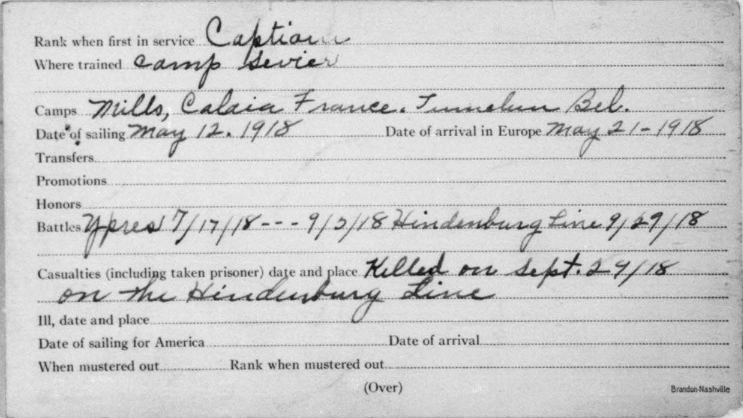 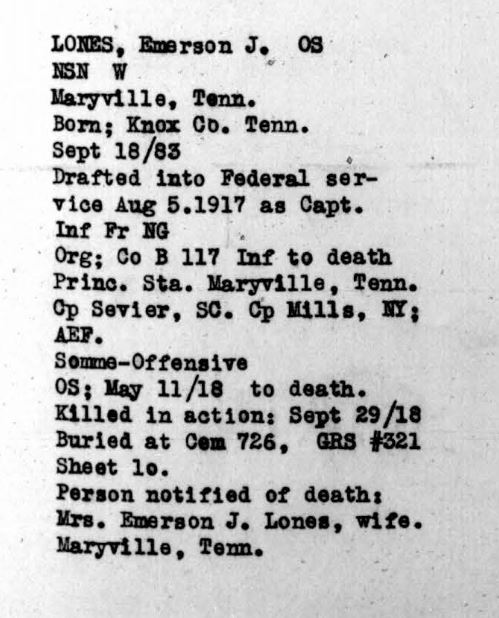 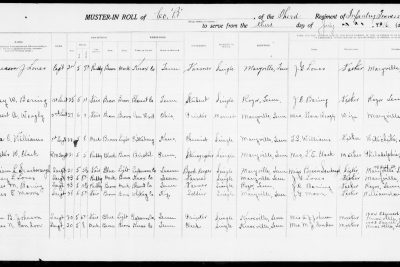 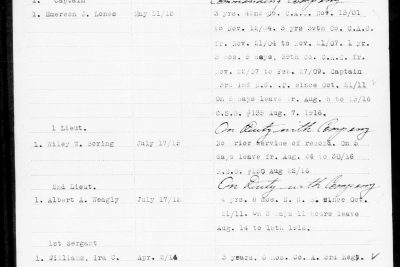 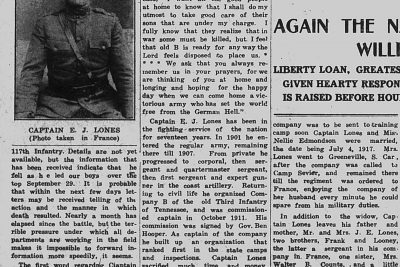