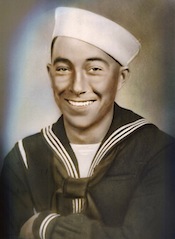 Elmer Howard Russell served on the U.S.S. Pickerel (SS-177). He was reported missing in action on 6 May 1943, officially declared dead on 10 August 1945. He is memorialized at Honolulu.

From the Submarine Force Museum (By Education Specialist on Thursday, 3 April 2014 at 8:00 am Posted in Submarine History):

The loss of USS PICKEREL (SS-177) during her seventh war patrol is one of the many mysteries of World War II. She left Pearl Harbor in 18 March 1943, topped off with fuel at Midway on the 22nd, departed for the waters around Honshu, Japan, and was never heard from again.

Japanese records credit PICKEREL with the sinking of Submarine Chaser Number 13 on 3 or 4 April. Shortly after the attack, a Japanese aircraft spotted an American sub, dropped 23 bombs, and called in the surface cavalry. Two ships arrived and pounded the area of the sighting with 26 depth charges. Shortly thereafter they spotted oil floating on the water and assumed that they had hit their target. But on 7 April a cargo ship was sunk in PICKEREL’s area; there were no other American subs in the vicinity and she was awarded the kill during post-war reckoning.

It is possible that the oil tanks aboard PICKEREL, a relatively old boat commissioned in 1937, leaked, expelling the oil the Japanese saw on the surface after the attack in the first days of April but not indicating the boat’s demise. It is also possible that the dates listed in the records were wrong, or that PICKEREL was a victim of one of the several other anti-submarine attacks the Japanese launched in her area during the time period. Still others have argued that the boat may have been sunk by one of the many mines the Japanese had placed in the waters around Honshu.

Ultimately the cause of PICKEREL’s demise doesn’t matter nearly as much as the fact that her loss left 74 families without a loved one and with many questions that will probably never be answered. 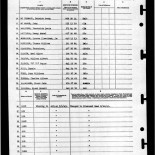 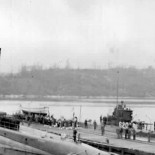