“He was born in Powell, TN. His father’s and mother’s names were Samuel Strother and Byra Mullins. I know that he was traveling to the war by boat when the Germans bombed his ship. His remains were never recovered. A tombstone is placed in Arlington National Cemetery.” -Submitted by his niece, Pearl Gregory

He is memorialized at the Tablets of the Missing at North Africa American Cemetery, Carthage, Tunisia.

He enlisted in the Army on April 16, 1943 at Fort Oglethorpe, Georgia. He was noted, at the time of his enlistment, as being employed as a Farm Hand and also as Single, without dependents.

Elmer was a passenger on the H.M.T. Rohna.
The Rohna and four other troop ships left Oran in French Algeria with cargo and troops. Off Béjaïa, Algeria the convoy was attacked by an estimated 60 German Luftwaffe Heinkel 177’s. One of the 177’s, piloted by Hans Dochtermann, released a glide bomb that hit Rohna on her port side and she eventually sank.
1,138 men were killed, including 1,015 U.S. personnel. The attack is the largest loss of US troops at sea due to enemy action in a single incident. 35 U.S. troops of the 2,000 originally embarked later died of wounds.

The Knoxville Journal, June 7, 1943
Pvt. Elmer Mullins, son of Mrs. S.S. Mullins, Powell Station, Route 1, is in the Amry Air Corps and is stationed at Greensboro, N.C. He has been in the service two months and has taken tests to become a pilot. Before entering the service, he attended Green Hill School. 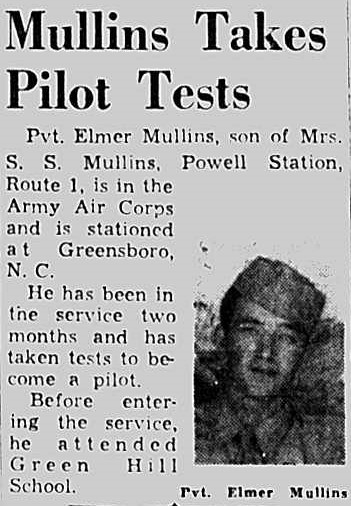