The President of the United States takes pride in presenting the Distinguished Service Cross Posthumously to Elmer E. Lewellyn ER06142686, Private First Class, U.S. Army, for extraordinary heroism in connection with military operations against an armed enemy of the United Nations while serving with Company E, 2d Battalion, 38th Infantry Regiment, 2d Infantry Division. Private First Class Lewellyn distinguished himself by extraordinary heroism in action against enemy aggressor forces in the vicinity of Oneamsong, Korea, on 13 January 1951. On that date, Company E was defending a key terrain feature in the Wonju area when a numerically superior enemy force launched several fanatical attacks against the company positions. In the initial attack, Private Lewellyn, a newly assigned replacement that had joined the company the preceding day, was thrown from his foxhole by the force of an enemy concussion grenade that exploded near his position. Quickly recovering from the shock of the blast, he crawled back to his position and aided in repulsing the attack by placing withering fire on the enemy. When the enemy troops rallied and launched a second attack, Private Lewellyn, heedless of the intense enemy fire, moved from one position to another in order to gain a better field of fire and thus inflict greater casualties on the enemy. Although seriously wounded during the second enemy assault, Private Lewellyn refused to retire for medical attention. When the enemy closed in for the third and final assault, Private Lewellyn leaped from his foxhole and stood fully exposed to the hostile fire, yelling taunts at the enemy and shouting words of encouragement to his comrades. During the final assault, enemy troops approached to within a few yards of Private Lewellyns position but he steadfastly refused to fall back and killed several enemy soldiers at his position before he fell mortally wounded. Inspired by the intrepid courage and self sacrifice of Private Lewellyn, his comrades tenaciously held their positions, inflicted tremendous casualties on the enemy and successfully repelled the hostile assaults.
Headquarters, Eighth U.S. Army, Korea General Orders No. 581 July 24, 1951 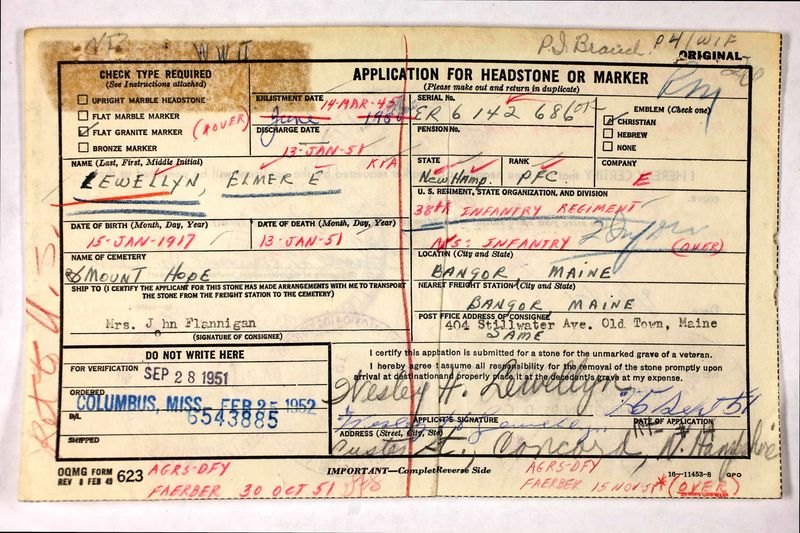