Born 1914, Tennessee
Missing in action since 5 February 1945 at sea, 5 to 8 miles SE of Owi Island
Memorialized at Manila American Cemetery. He also has a memorial stone in Happy Valley Memorial Park, Elizabethton, TN.

Private Eldridge Edens was a passenger on aircraft UC-64A, serialnumber 43-5176, nickname ‘Spook, Jr.’ They departed from Mokmer strip, Biak at 1330 on 5 February 1945 on a Cargo mission to Owi Island.

The aircraft failing to return in reasonable time, the Operations Officer instituded an immediate search. It was reported about 1630 that an L-52 aircraft had crashed South East of Owi Island. The entire area was then searched by two C-46’s; XA329 and XA344n and by an L-5 until 2000. No life or wreckage were sighted. Near the end of the search it was reported that a U.S. Navy crash boat, called ‘Fifi’, had retrieved wreckage of an aircraft from a point approximately six miles South East of Owi Island. Investigation failed to locate crash boat or witnesses at that time.

Further search was conducted on the morning of 6 February 1945 by Major Callahan and Captain Scott, 433rd Troop Carrier Group Operations, and by Lt Shaw. Lt Rogers, Lt Ross, W/O Greene and Sgt Scavone from 68th Troop Carrier Squadron Operations, Executive and Engineering departments. The wreckage was located, investigated and returned to Home Base at Biak.
During this time two wing sections were sighted one mile off Sorido strip, Biak. These wing sections, which were retrieved by 4th Air Sea Rescue, did not turn out to be those of the UC-64 in question. Testimony has been obtained from Lt Robert E. Bullis,   58th Troop Carrier Squadron, 375th Troop Carrier Group, who at 1400 5 February 1945 observed the UC-64 in a spin at four thousand feet; and from Lt John J. Parkovic, 8th Combat Cargo Squadron, 2nd Combat Cargo Group, who circled the location of the aircraft after it had crashed.

Testimony of 1st Lt John J. Perkovic, Pilot:
C-46, XA697, of which I was pilot, took off from Owi Island 1400 in glider tow mission. At an approximate altitude of 500 feet, the crew chief saw an airplane go into a spin from an altitude of about 4000 feet. We circled the area in which we believed this plane fell, 5 to 8 miles SE of Owi Island, and saw from an altitude of about 100 feet, wreckage follows: a strip of oil slick 2 or 3 hundred yards long, the center section of the airplane, a yellow fueld tank way off to one side, and small pieces of debris floating in the vicinity. 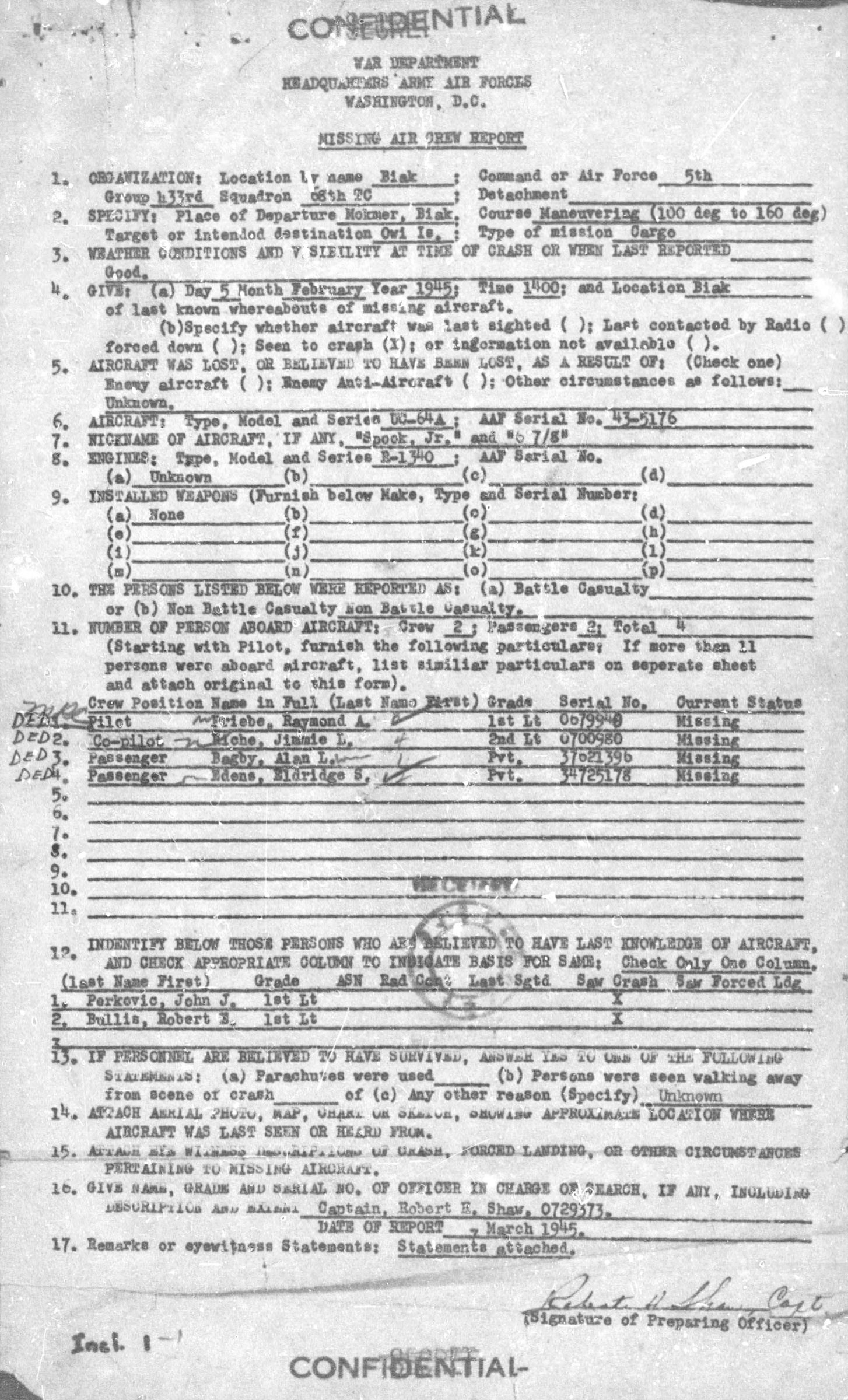 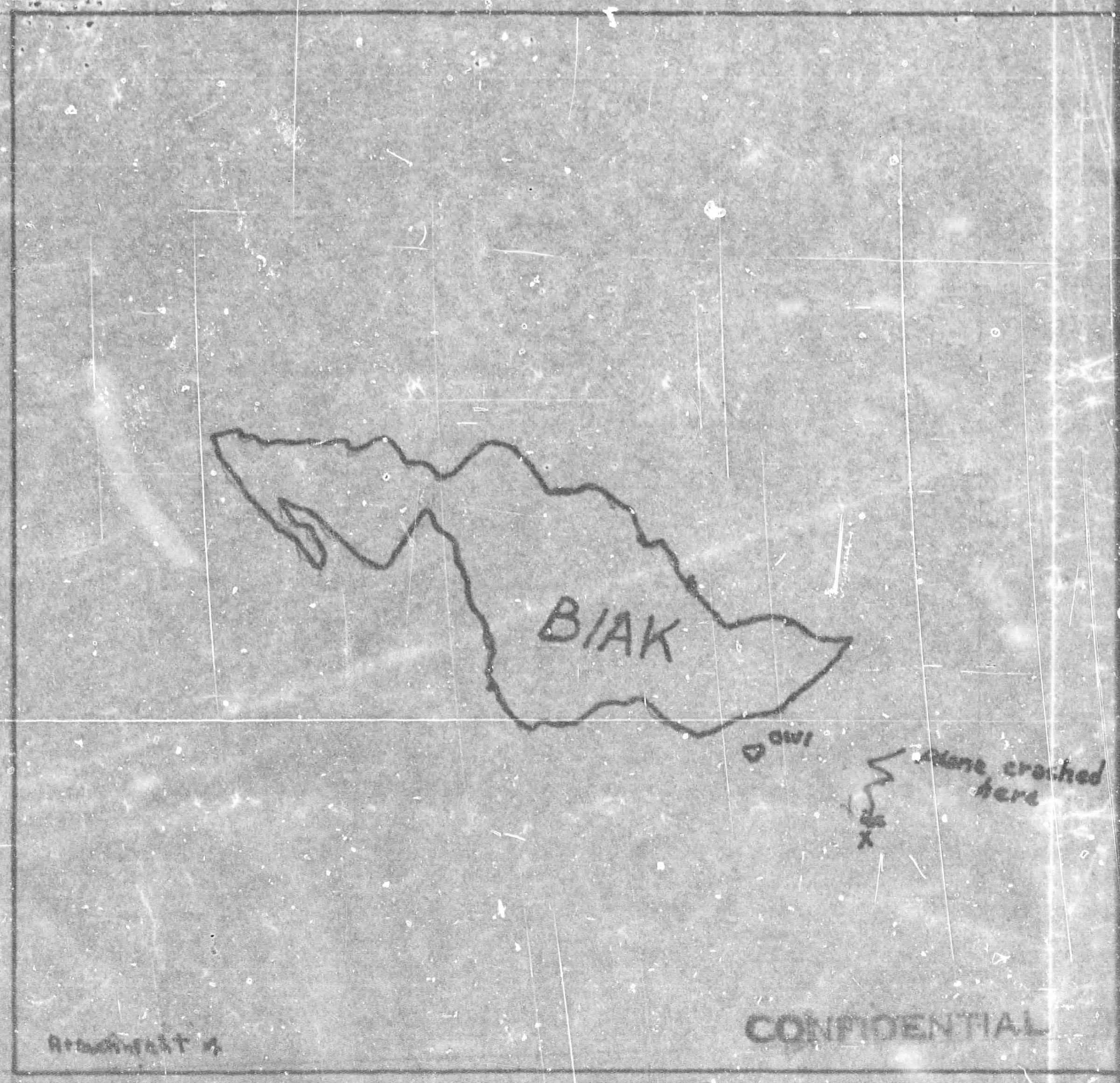