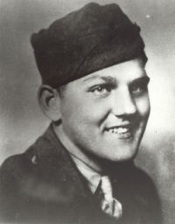 For conspicuous gallantry and intrepidity at the risk of his life above and beyond the call of duty while acting as leader of a Rifle Platoon, serving with Company I, 3d Battalion, 1st Marines, 1st Marine Division, in action against Japanese forces on Okinawa Shima in the Ryukyu Chain, 4 May 1945. Taken under sudden, close attack by hostile troops entrenched on the reverse slope while moving up a strategic ridge along which his platoon was holding newly won positions, Sgt. Kinser engaged the enemy in a fierce hand grenade battle.

Quick to act when a Japanese grenade landed in the immediate vicinity, Sgt. Kinser unhesitatingly threw himself on the deadly missile, absorbing the full charge of the shattering explosion in his own body and thereby protecting his men from serious injury and possible death. Stouthearted and indomitable, he had yielded his own chance of survival that his comrades might live to carry on the relentless battle against a fanatic enemy.

His courage, cool decision and valiant spirit of self-sacrifice in the face of certain death sustained and enhanced the highest traditions of the U.S. Naval Service. He gallantly gave his life for his country.”

Downtown Greenville proudly places patriotism on display with dozens of American flags. Yet, some of the area’s greatest displays of patriotism are scattered throughout the county at a bridge, a park, the courthouse, and inside the Nathanael Greene Museum.

“We have our Elbert Kinser case on display which has his citation, his Medal of Honor, his Marine Corps sword, and his picture,” said Earl Fletcher, executive director of the Nathanael Greene Museum in downtown Greeneville. “We are very fortunate to have Elbert’s medal in our collection.”

Elbert Kinser is one of only 14 Tennesseans to receive the Medal of Honor. Kinser’s brother donated the Medal of Honor and Elbert’s other military awards to the museum. The decorations were received posthumously after Kinser gave his all on battlefields more than 7,000 miles from the fertile hills he called home.

“He [Kinser] was a farm boy. He was just a good old Greene County farm boy who left the farm and went to the South Pacific in World War II,” said Fletcher.

Kinser enlisted in the military in December 1942. After boot camp in South Carolina, the young Marine deployed to the South Pacific and fought in battles ranging from Guadalcanal and Peleliu. By the spring of 1945 he had obtained the rank of Sergeant and was the leader of a rifle squad.

After years of capturing island after island, in early 1945 the Allies’ final stepping stone to mainland Japan was Okinawa. The island chain was of great strategic importance because it would allow U.S. bombers to stage air attacks on mainland Japan. The Japanese troops defended Okinawa with a suicidal ferocity that made it the deadliest battle of the Pacific War.

After intense bombardment of Okinawa from air and sea, the Marines invaded on Easter Sunday, which in 1945 also happened to be April Fool’s Day.

“They had made the beach head and were going on inland, pushing the Japanese to one end of the island,” said Fletcher.

Kinser battled and survived the bloodbath at Okinawa for more than a month. His good fortune ended on May 4, 1945.

“Kinser was leading a rifle squad up a ridge when he was wounded in the leg. There were four medical corpsmen that ran to Kinser’s squad and loaded him up on the litter [stretcher],” said Fletcher. “An enemy grenade landed right beside all of them and Kinser rolled off [the stretcher] and fell on the grenade to absorb the explosion with his body. He gave the ultimate sacrifice.”

U.S. forces claimed victory at Okinawa in late June. In August the war ended thanks to the atomic bomb. War concluded and men returned safely home just three months after Kinser made the ultimate sacrifice for his country.

There were more than 60,000 U.S. casualties at Okinawa with more than 12,500 of those dead or missing. Estimates of Japanese deaths exceed 100,000. Of all the heroic deeds in the furious battle, the actions of a farm boy from Greene County stand out. While all of those who fought at Okinawa knowingly risked their lives, Kinser also made a split-second and conscious decision to end his life for the benefit of others.

“He knew what was going to happen when he went onto the hand grenade. There’s no higher form of patriotism than to give your life for someone. I mean, a lot of people can think they would be willing to give their life to save someone like their parents, their spouse, or their children. But of the people Kinser saved were family. He gave his own life so that his friends and his squad and the four medical personnel that came to evacuate him could live.”

The Medal of Honor was posthumously awarded to Kinser in 1946 and presented to his parents in Greeneville. Kinser also received the Purple Heart, the Presidential Unit Citation awarded to the 1st Marine Division, the Asiatic-Pacific Campaign Medal, and the World War II Victory Medal.

Kinser was buried in Okinawa. His remains were brought home to Greeneville in 1949 and buried at Solomon Lutheran Cemetery at 670 Cove Creek Road.

In recognition of Kinser’s service, the U.S. Marine base at Okinawa was named Camp Kinser. His legacy is also apparent throughout Greene County. A historical marker in front of the Greene County Courthouse gives an account of Kinser’s bravery. Kinser Park sits along the Nolichucky River and was created from land donated by TVA in 1976. The sizable Kinser Bridge provides safe passage for vehicles across the river on Highway 107.

“He has been so well thought of in Greene County that we have a bridge named after him, we have a park named after him, and rightly so. Any soldier is putting himself in harm’s way for the freedom of our nation. But there is just something special about Kinser’s actions and it just so happens that he is ours. He is a Greene Countian. We are very fortunate to have had a part in his life and the Medal of Honor.”